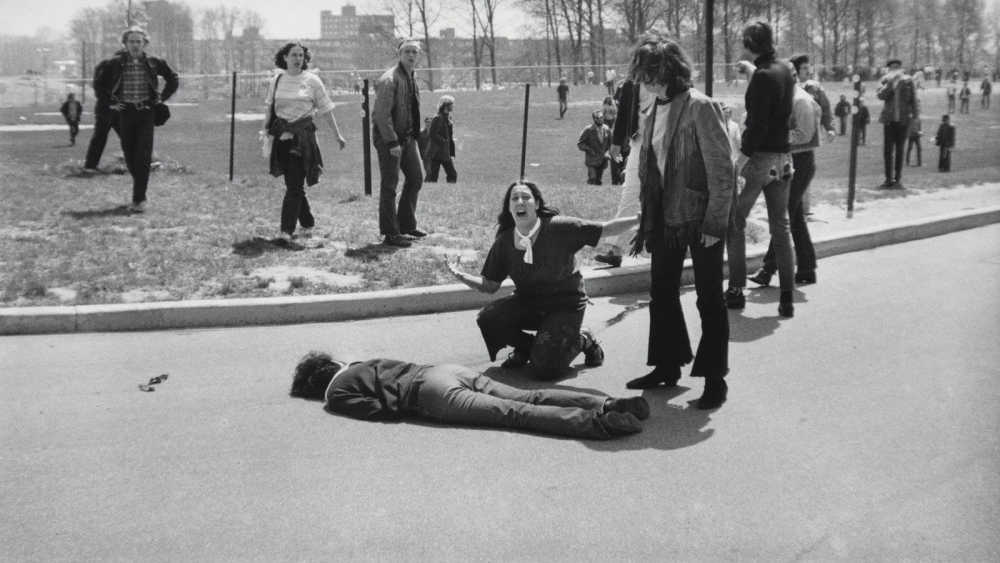 This was taken by John Filo, who was a photojournalism student at Kent State University, in the aftermath of the shootings. It shows 14-year-old Mary Ann Vecchio screaming over the body of 20-year-old Jeffrey Miller. Filo was later awarded the Pulitzer Prize for the photo.

What if you knew her and/Found her dead on the ground?/How can you run when you know? - From "Ohio" by Crosby, Stills, Nash & Young

On May 4, 1970, four students were killed in a standoff between Ohio National Guard troops and protestors during a rally which was being held at Kent State University.

The tragedy was the hot point of students' swift response to President Richard Nixon announcing the U.S. troop incursion of Cambodia's eastern border. It was considered a "safe zone" for North Vietnamese and Viet Cong soldiers, as Cambodia was neutral.

Kent's mayor, LeRoy Satrom, declared a local state of emergency on May 2, and then requested that Gov. Jim Rhodes send in the Ohio National Guard to quell the protests.

Perhaps the last straw came when Kent State's ROTC building was burned down later in the evening. President Nixon's Commission on Campus Unrest determined that of those who participated, "a significant portion weren't Kent State students." Some protestors, though, prevented the fire from being extinguished by slashing fire hoses.

Two days later, a line of guardsmen advanced on protestors who had gathered on the commons and then retreated to a practice field and a parking lot. After retracing this movement, a sergeant reportedly began firing his pistol. Twenty-nine guardsmen later claimed they fired their rifles. The volley was determined to have lasted 13 seconds.

Jeffrey Miller, 20, was shot through the mouth and killed instantly.

Sandra Scheuer, 20, was shot in the neck and died from blood loss. She was said to have been walking to class.

Allison Krause, 19, was shot through the chest and later succumbed to her injuries.

William Schroeder, 19, was shot in the chest and died during surgery. He was also reported to be walking to class.

In their wake, the shootings at Kent State strengthened a nationwide student strike. The protests eventually led to hundreds of colleges and universities being closed.

A Gallop poll conducted not long after the shootings indicated that 58 percent of Americans believed that they were justified. One woman, who was unidentified and interviewed on the street about her reactions, said, "I'm sorry they didn't kill more."

Ffity years have passed since that woman uttered this. The tragedy still resonates as an embodiment of the deep generational divisions the Vietnam War provoked. I believe it is best to let others who felt the aftermath speak as to how they remember Kent State.

Cloverdale School Board President Vivian Whitaker related that she was a sophomore at Indiana State University at the time. She said she couldn't believe the news then.

Dr. Rick Warner, a well-loved history professor at Wabash College, said in a recent Facebook comment that he was about 14 years old when the shootings happened.

"As for Kent State, I have always believed that this was the turning point in public opinion about the war, specifically for middle-class Americans," he wrote. "It was rather shocking to them to see four white college kids shot down on a midwestern campus, and arguably convinced a number of Americans to finally oppose the war."

Fellow Wabash alumnus and Delt brother Martin Tuohy provided that he watched a colleague review an investigation into the shootings conducted by the U.S. Attorney General's Office. This included autopsy photos and testimony from witnesses.

"I think about the 'four dead in Ohio' and the stupidity of the Vietnam War every Christmas Eve," he wrote. 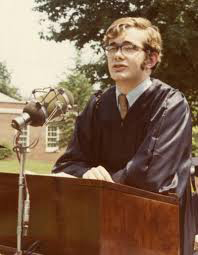 Bill Placher, who delivered a commencement address at Wabash about a week after the shootings, pulled from Albert Camus' novel "The Plague." In it, a doctor shows how an outbreak of bubonic plague hits the French-Algerian city of Oran and affects different people.

Dr. Placher said it was, perhaps, not hard to think of this turbulent time in our country's history as a kind of "pestilence." But what he provided then was some hope.

"The class of 1970 does not enter a world full of nothing but glorious opportunities," he said. "But perhaps we'll learn that there are more things to admire in men than to despise ... knowing it will never be enough to change the world, we will act more honorably than we expected we would; perhaps we'll have a lot of fun along the way."

Dr. David Blix, a beloved religion professor and friend of Dr. Placher's who witnessed his iconic speech, related to me recently that Kent State may serve as a cautionary tale, in which divisions in the country may be more radical than they might've been then.

It is important to remember these four students and those who were killed or injured in other confrontations, and to reflect on how another such tragedy can be prevented.