These protest photos were not staged 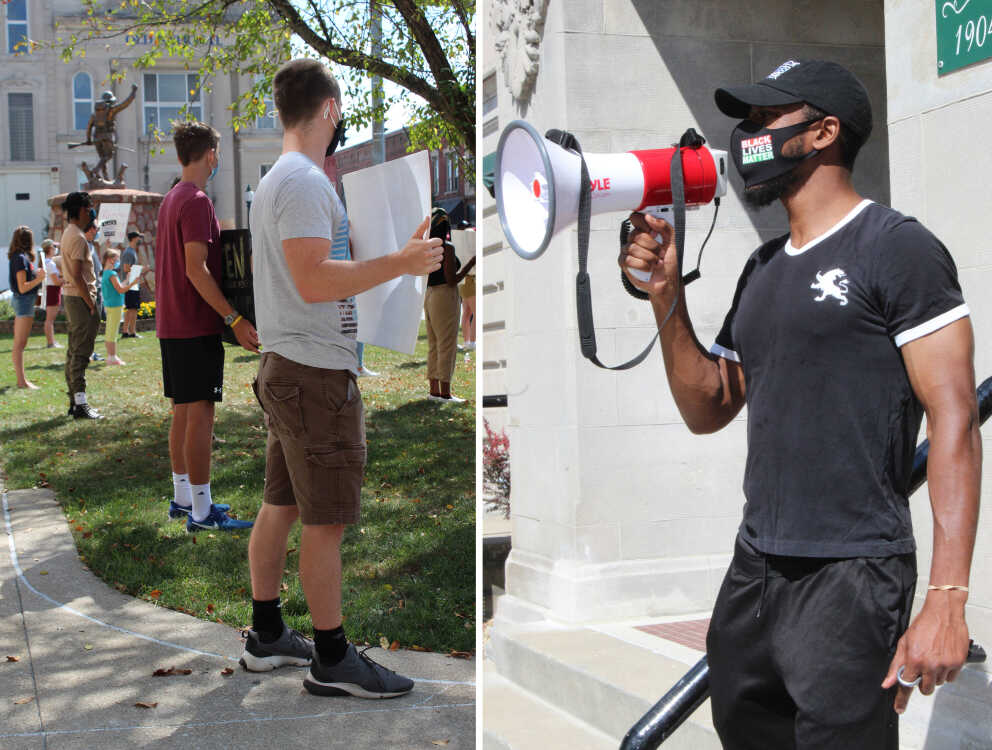 Well, the one on the right was not. I want to clarify what happened with the other one.

By the way -- This blog post is satirical. Nonetheless, I am sure some readers will convince themselves that this reflects reality. C'est la vie.

Both photos were from last weekend's protest that took place at the Putnam County Courthouse -- a large demonstration that attracted at least 60 community members. 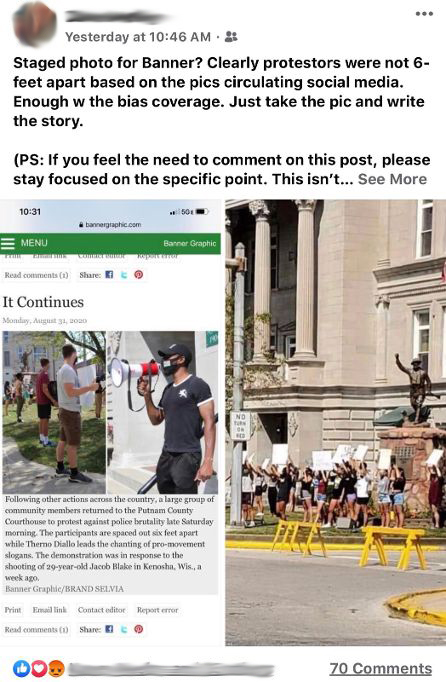 A Greencastle resident compared my photo to an anonymous one taken from the corner near Starbucks. He provided I had staged my photo to make it look like the protesters were standing six feet apart -- while the anonymous photo showed them bunched up and not social distancing.

And you know what? He was actually right! Nevermind the fact that the two photos show two different perspectives of the same environment.

Here's how I got the photo where I wanted it:

I met up with them shortly after they began coming onto the courthouse lawn at 11 a.m. (I usually get my shower about this time on Saturdays, but I had to be there early). I also brought my handy-dandy tape measure with me.

After the great majority of the demonstrators had arrived on the south side of the courthouse lawn -- and before I found a good place to take a horizontal shot -- I took out my tape measure and made absolutely sure that they were ALL six feet apart.

I will admit that I got touchy with some of them when they drifted away from their area. "Get back in your spot! You've got a lot riding on this!" I shouted to a few of the toddlers who were present. I was happy to ensure that they towed the optics as well.

I watched over them until they disbanded at about 1 p.m. In the end, I think I made them look good, if I may say so myself. But they really did all the work; I just directed. I really wanted to not be just another journalist/bystander for this new demonstration.

Check presentations aren't the only things I should set up how I like them. (at least I don't make them do funny faces or have legs behind their backs like contortionists ...)

The Banner Graphic newsroom is committed to propping up these protests, and I'll do whatever I can to give them the unabashedly positive coverage they deserve! We are set in our bias, even though we do our utmost to "just take the pic and write the story."

I must point out that I can no longer find the anonymous photo on Facebook. But this is beside the point, because I -- and many others -- know that it has definitely existed.

Also, I want to give a big "Thank you" to our critics for questioning the narrative. I myself didn't see a Greyhound bus drop any of them off, but I'm sure that it happened!

(Silly me. I thought they were all just DePauw students who had come back to town.)