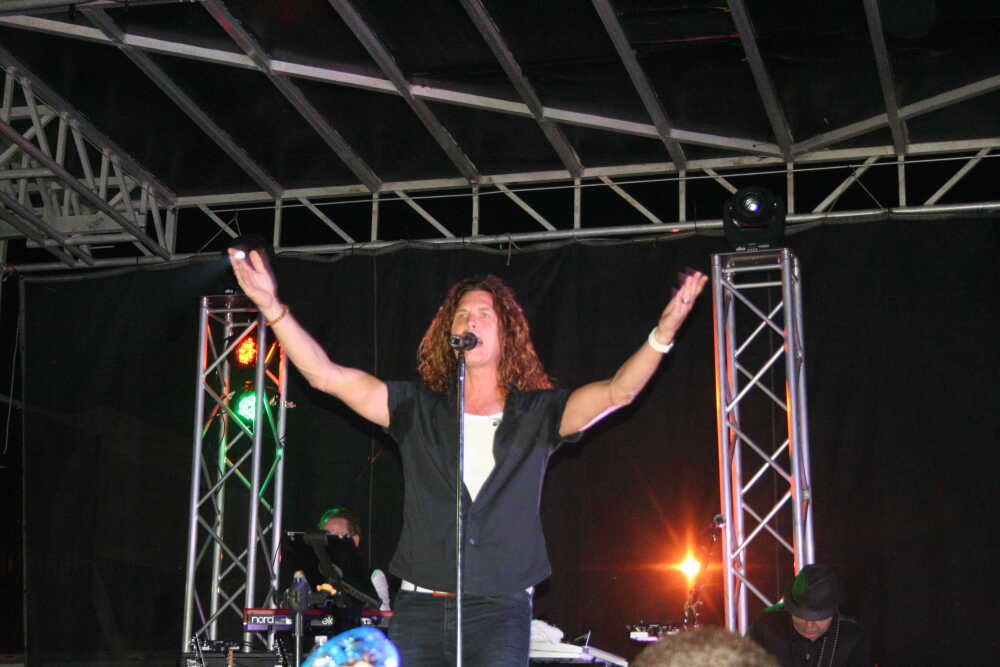 It's been 36 hours or so now and my feet are still moving like the music is still playing.

Wow, was that a great time Saturday evening on the courthouse square or what?

Thank you, Gail Smith. I know she has some sponsors and some help but essentially this festival has been her baby and it keeps getting bigger and better each year. So if you haven't told her yet, let her know how much you enjoyed the music festival she makes possible each summer.

Saturday night the streets downtown were full of people by the time the sun was setting on a 90-degree day. People you don't see downtown for anything else were there. In droves.

So many people were dancing in the street that when Mark Maxwell, the Louisville Crashers lead singer, bolted from the stage to plow through the crowd to find the fellow who was proposing to his girlfriend by the courthouse steps, there was no way I could make it through the throng to get there in time to photograph the moment.

Besides, I might have lost my place right there in front of the stage. Or as Pat McCune put it, "We're in the mosh pit!"

Not so sure we got moshed but my feet felt like they'd been mashed by the end of the night. But who cares, we were having too good of a time.

What a night of feel-good music and fun.

From the time we made our way up to the square after covering the Putnam County Republicans' hog roast and pie auction event at the fairgrounds, we were able to hear War Radio -- accompanied by trombone and sax even -- pounding out "Vehicle," one of my all-time faves by the Ides of March. Growing up in the Chicago suburbs, those guys were like the War Radio of our neighborhood.

Setting a different tone moments later, Joe Buser belted out "Back Home Again in Indiana" in celebration of 2016 as the state's bicentennial year. A nice touch to the proceedings and a great way for Joe to follow up on his success in "1776" at Putnam County Playhouse, where he stole the show as John Adams.

Providing just the right mix of music, their energy feeds the audience, wrapping up in the music where everyone is singing along to their perfect covers of hits like "Sweet Caroline," "Two Tickets to Paradise," "You Give Love a Bad Name" and much more.

A medley of Mellencamp followed with "Hurt So Good," "Authority Song," "Small Town" and "Rocking in the U.S.A." keeping Hoosier feet and hips moving.

These guys may be from Kentucky but they know how we roll.

For the second straight year as the music made everyone merry, a DePauw student to my right asked: "Did they do this every weekend down here?"

The wise guy in me wanted to say, "Yes, yes they do," but my heart answered instead.