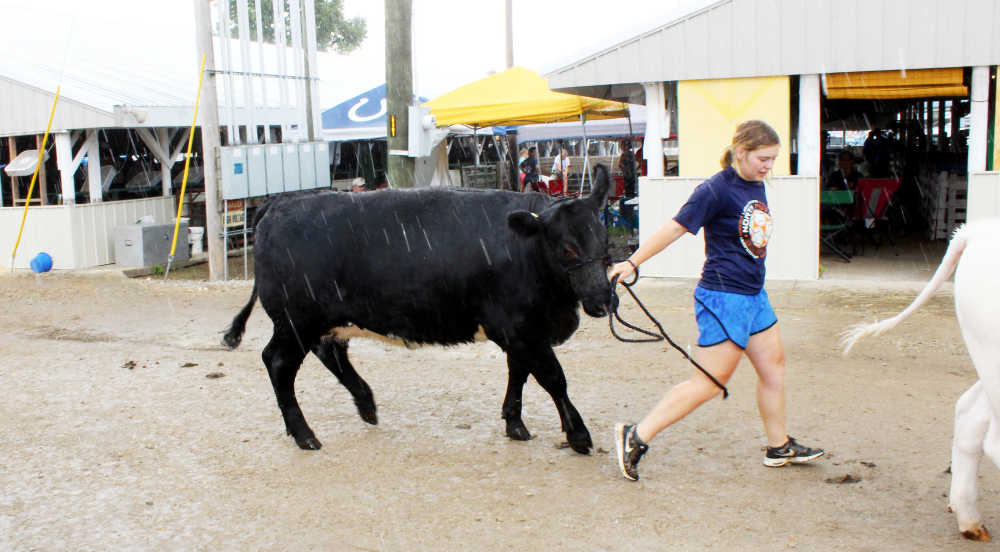 Rain sends cattle scurrying back to the Beef Barn after a visit to the wash racks.

Over the course of covering 30-plus Putnam County Fairs, I've formulated my own series of platitudes about the fair and when to really consider it in full swing.

To me, the fair never officially starts until we've been rained on at least once (that's been every day so far).

The fair doesn't officially begin until I've eaten my first Legionburger (consumed a couple Saturday, thank you very much).

The fair doesn't really start until I've devoured that first elephant ear (took one home after the Dairy Show Sunday).

The fair doesn't really begin until I've stepped in a wayward cowpie while taking photos (again, a Kodak moment at the Dairy Show Sunday). Fouled my favorite Florsheims, by the way. Should have known better. After all, I've been a judge for Bossy Bingo before, determining winners on where cowpies landed.

Of course, the fair doesn't really get under way until the first person suggests, "Eric Bernsee to the Beef Barn" (thanks, Brandolph) or recites the famous "Kurt CO-bain to the Beef Barn" fairgrounds announcement.

No, the fair never really starts until we've parked in the mud at least once (another gooey Sunday behind-the-Beef-Barn experience).

The fair is never really in full swing until an old-timer complains about the need for a second ingress/egress to the fairgrounds. And for the 30th time, we know, we know.

Yep, all those fair platitudes seem to rear their heads from year to year, but this year I've managed to encounter them all in the first 2-1/2 days of the fair -- or more exactly, ever since rain threatened the start of Friday's fair parade and then interrupted things Sunday, sending llamas and alpacas, oh my, scurrying for cover under the eaves of the Sheep Barn as they waited for the Dairy Show to vacate the Inside Arena.

Heck, this year I even got stepped on by a Dairy Show entry, albeit thankfully the smallest four-legged contestant, which honestly looked more like a deer than a cow to me.

So now being able to say the 2018 Putnam County Fair is officially rolling along, let's everybody have fun. Just watch out for the rain, the mud, the cowpies and all.

And remember, the fair's never over until the fat lady sings.

You'll have to forgive me, we're not even halfway into the fair and my head is spinning like a tilt-a-whirl.

Which reminds me, the fair's never really going until the carnival makes you dizzy ...