24 Songs of Christmas, Dec. 6: 'It's Beginning to Look a Lot Like Christmas' -- Perry Como and The Fontane Sisters 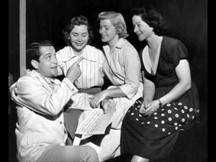 (I took a gamble here, choosing the day that I thought it would, indeed, begin to look a lot like Christmas. Looks like I was right.)

This selection could have gone a lot of directions.

When I was a kid, I had the cassette of "A Chipmunk Christmas," the soundtrack to a TV special of the same name. The tape opened with Alvin, Simon and Theodore trying to wake David Seville with the song, punctuating lines with "Wake up Dave!" and "Good morning!"

The clearly exhausted Dave countered by delivering the tired line "And I can't wait till you three boys are back in school again."

Also up for consideration is the Johnny Mathis version from the 1980s that is probably the most commonly played over the last 25 or so years.

But it was originally a hit for Como and the Fontanes, and that remains the gold standard for me. I can definitely be a traditionalist this time of year.

There's a certain sleepiness to Como's voice that I've always loved when I listen to this song.

Additionally, I found the video below, which is an absolute delight to watch. TV has never looked like this in my lifetime, and that makes me truly sad.

If someone could promise me it wouldn't be hosted by some moron like Justin Bieber, I'd totally be on board for reviving the variety show format.

For now, enjoy what television was 53 years ago.