A dose of B-3: Joe Cocker's "With a Little Help from My Friends" 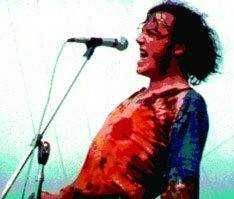 I never meant to take this long of a break from the B-3 blogs, but life happens sometimes. For anyone who follows the blog, my dad is doing much better. He's now staying in a nursing home, which he's not exactly pleased about. But it's better than being in the hospital with pneumonia.

Anyway, this blog was prompted today when a certain reporter said I stole his blog idea. Never mind that my blog post was several days before the conversation we had about the iPod Classic.

But this isn't about a feud. It's about music. As a reminder, there isn't nearly enough Hammond B-3 organ in music these days. (Or any organ for that matter. I'm no expert on exactly what kind of organ is in a particular song.)

So this blog is devoted to those songs that feature that amazing sound. Most of them are from the '60s or '70s, back when musicians really knew what they were doing.

Today's song is submitted by the late, great Joe Cocker, who gives us a ...

(I know Dawson's dead, but I also thought he was dead a long time before 2012. That's why the team's named for him.)

Back to the music again. Bring on the hate mail from the Beatlephiles out there, but Cocker's version of "With a Little Help from My Friends" is THE definitive version of the ditty originally sung by Ringo.

Maybe I think this because "The Wonder Years" came out in the formative period of my TV and music fandom, but there's little comparison between the original and Cocker's version.

When Cocker sings about getting by with a little help from his friends, you believe him. There's something wonderfully flawed about Joe Cocker that makes me root for him but also thinks that he needs his friends to navigate the basic tasks of any given day.

As for the organ, it sets the tone for the song. After Cocker's introduction to the Woodstock fans, the instrument kicks in, bringing with it feelings of joy and of sadness.

And that's this song. It's in praise of those around us who love us, but there's a dirge-like quality to the music as well. We love those around us dearly, but there is also something sad about being so reliant upon them.

As the cacophony of song builds toward Cocker's cry at the 4:58 mark, the organ is there, beneath everything. It returns to prominence as the song quiets to its conclusion, seemingly representing the constant, calming presence of the friends Cocker is singing about.

This song gets by with a little help from the B-3.

Enjoy the madness of Joe Cocker at Woodstock.