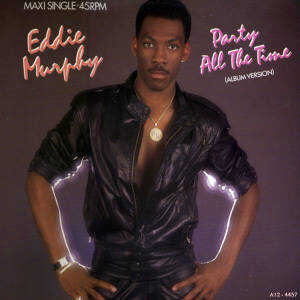 Is this a good song?

Does Rick James' involvement somehow give the project some legitimacy?

If anything, the project brings Rick down. (Cocaine's a helluva drug.)

I really do. "Party All the Time" definitely makes for some Class A guilty pleasure listening.

However, I do have some questions.

When Eddie comes in and Rick gives him a bro hug, why doesn't he call him "Darkness?"

At the 40-second mark, Rick gets on the mic and tells Eddie to put on his headphones, but how does Eddie hear him?

Where is Charlie Murphy? Did I miss him?

Watch the very end of the video. Can Rick not give the "OK" sign with his hand? He should have just gone with the horns to begin with.

How did this song get to No. 2 on the Billboard chart? It stayed there for three weeks behind Lionel Richie's "Say You, Say Me." On second thought, how did "Party All the Time" never get to No. 1? It's better than that song.

Not much else to say about this one. It's the end of fair week and I'm exhausted. Unlike Eddie's girl, I don't want to party all the time. I'm going to bed.