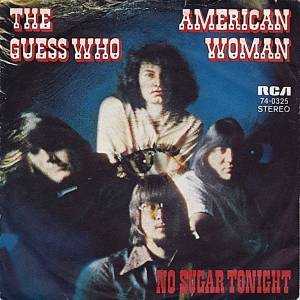 If not for the fear of heart disease and diabetes, every meal might feature beef, potatoes and a delicious helping of ice cream.

But I don’t want to die tomorrow, so I resist, at least keeping myself comfortably overweight as opposed to morbidly obese.

Over the years, though, I have developed a few habits that keep me from unnecessarily overindulging. The rule is: If it doesn’t add anything to the experience, then why do it?

For example, we use unsalted butter at our house. I said that to some folks recently and they looked at me like I had two heads.

Also, any dinner roll worth a diddly-darn doesn’t need butter, so why would I add it?

Finally, while cream is sometimes necessary in coffee, I almost never add sugar. I can’t taste it anyway so what’ the point of those extra carbs?.

What does any of this have to do with Canadian rockers The Guess Who? Nothing really, but this song is called (at least partially) “No Sugar Tonight.” Although, to hear songwriter Randy Bachman’s story about his inspiration for the song, it was about a different kind of sugar entirely.

In the end, it’s my blog and this song is awesome, particularly in the part when the two songs, with their different melodies, are sung in counterpoint to one another.

Actually, the version I included isn’t The Guess Who, but singer and keyboardist Burton Cummings along with guitarist Bachman (sans -Turner Overdrive) playing together in 2000. What’s remarkable to me about this is how these two excellent musicians recreate the counterpoint of the original — which I believe was an overdub of Burton Cummings singing both parts. It’s a testament to how an excellent song, originally recorded in the studio with multiple musicians, multiple takes and lots of equipment, can be re-created by just two men, provided their musicianship is as strong that of Bachman and Cummings.

Also, Bachman just turned 75 on Thursday, so why not pay a little bit of tribute to the man who was a hitmaking machine for two bands of the ‘60s and ‘70s.

On top of all of this, Bachman and my guy Neil Young were buddies in Winnipeg before either of them was famous. That makes him all right by me.

And if you’re really wanting to hear the original, here you go.