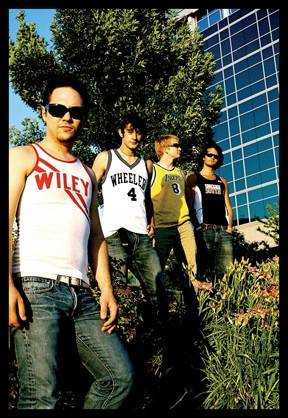 The band members of TGL are on the precipice of a big decision.

With record-label interest in their disc "Just So You Know," a 6,000-mile summer tour under their belts and awards like "Best Unsigned Band" from the Web site www.crowdrules.com and "Artist of the Week" from MTVu, the four Greencastle High School grads must choose whether to play it safe and stay in school or live their dream, sign a record deal and hit the road.

The band members are all in college and geography is not on their side. Stewart is a senior at Capri College in Cedar Rapids, Iowa.

Lead guitarist Quinn Fenlon is on scholarship at Brown University in Providence, R.I., with two years left in school. Drummer Will Cath is a DePauw University junior.

And lead vocalist John Sibbitt, a DePauw University senior, isn't even in the country -- he's studying in Ireland until the middle of December.

The pop rock band played its last show of the summer at DePauw University last weekend.

The four won't be able to meet up again until December, Stewart said.

So for now, the band is focusing on shopping its album out to independent record labels across the country.

And even though feelers to record companies have only been out for about a week, the band has already gotten a response.

Stewart said he had a long phone conversation Thursday with the owner of Lobster Records, a small Santa Barbra, Calif.-based label that has signed several bands, most notably Yellowcard.

The record executive showed interest in TGL, but made it clear that the band would go nowhere fast while the members were all still in school, Stewart said.

"It's kind of not too appealing when the guys in the band are in college," he said. "So we kind of have to smooth that over."

In order to really be successful, the band needs to tour year-round -- at least 275 shows a year - and would have to cut another studio album before spring, Stewart said.

Stewart plans to graduate in December, but the other three members of TGL have more school in finish. To have a shot at their dream of touring the country and making music full time, the others will have to drop out of college. Stewart says he worries the band might never have a chance like this again.

The details are still up in the air, but the next step that the band must take if the members are serious about trying to make it in the big time is clear -- hey must convince an independent label to sign them. If they achieve that, they'll be assigned a manager and a promoter who will help them book tours, which is a difficult and time consuming thing for a new band to do on its own, Stewart said.

Anyone interested can listen to some of the band's music, which can be accessed the group's website. The address is http://myspace.com/tglrock. TGL also as a music video available on YouTube.