CLOVERDALE -- The Cloverdale cross country teams hosted a three-way meet with North Putnam and Owen Valley Tuesday night. The hosts won both the girls' and boys' events. North Putnam finished third in the girls' meet and had an incomplete team for the boys' race.

Cloverdale's Jenna Lewis paced the field on the girls' side, finishing in 21:53, 25 seconds ahead of the second-place runner. 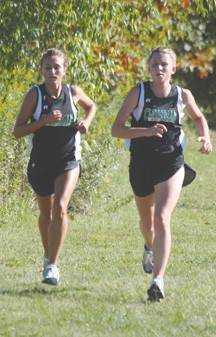 Cloverdale teammates Chelsie Haltom (left) and Jenna Lewis push each other at Wednesday's meet. Lewis went on to win the race in 21:53. Haltom, fighting through shin splints, finished third in 22:30.

"Jenna Lewis ran a good race," said Clovers coach Sam Brown. She led from start to finish, and I'm really proud of her. She did a good job."

The Clovers had the first, third, fifth and eighth place finishers in the race, but Brown also wished to highlight the performance of Samantha Monnett, who was the race's last finisher in 18th.

The Clovers needed Monnett simply to make a complete team Wednesday. Ashley McCallie, who is normally on the varsity, has been out sick for several days and has not had enough practices since returning to compete. So Monnett, a late addition to the team, stepped in and helped the Clovers win by just finishing the race.

Samantha Monnett ran tonight. She just had 12 practices in, but she helped us win the meet," said Brown. "All she had to do was finish, and she did. We won by four points, so it was a good help we picked her up."

Chelsie Haltom finished third in spite of a nagging injury she has been fighting all season.

"Chelsie Haltom has been fighting shin splints, and she's gonna tough it out."

Brynlea Mattocks finished fifth for the Clovers, and Alyssa Williams was eighth.

While Brown was happy with the win, he still sees a lot of room for improvement from the girls' team.

We're going to have to work a lot harder than what we're doing now if we want to even compete with Greencastle during the county and conference," Brown said. "We can be there, but we need to have our three, four, five runners pick it up."

North Putnam was led by the sixth-place finish of Taylor Alles, who was running in her first race of the year. Alles splits time between volleyball and cross country.

"it was nice to see Taylor run with us," said Cougar coach Jason Chew.

Whitney High finished behind Alles in seventh. Chew is simply impressed with the competitiveness he sees from this young runner.

"Whitney High, as a freshman, is running well," he said. "As a coach, it's really exciting when you tell her to pass someone and she passes two. She battles and races the entire time."

Hillary Salyers ran an improved race to finish 10th for the Cougars.

"I'm pleased with the way Hillary Salyers came out and ran more free than she has in the past," Chew said.

On the boys' side, North Putnam's runners had an excellent night, in spite of only fielding three competitors. Kenny Quisenberry won the boys' race with a time of 19:05, beating Cloverdale's Kyle Chambers by 46 seconds. 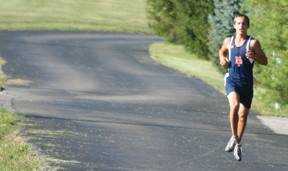 Without another competitor in sight, North Putnam's Kenny Quisenberry closes in on the finish Wednesday night. Quisenberry's 19:09 won the race by 46 seconds.

"I'm pleased with the way Kenny Quisenberry raced tonight," Chew said. "He established himself as on of three or four runners who will challenge in county and conference."

Chew like how all three of his runners began the race.

"I really liked how all three boys started fast," he said.

In spite of fielding only three runners, the coach remains positive about keeping the boys he has running improving.

"The focus hasn't changed. We still try to improve every night," Chew said. "It does hurt in that Quisenberry doesn't have anyone to push him every night at practice."

The coach added, though, that he currently has two out with injury, so he could be fielding a complete team before the season ends.

Cloverdale won the team event as the only one of the three to field a complete team.

"I though Kyle Chambers ran well," Brown said. "It's the first time all year we've had somebody break 20 minutes, so now we know it can be done."

"The boys need to keep working hard," Brown said. "Coach Mann's been working with the boys a lot more this year, and they've been doing a lot of speed work. Their times keep improving, so what we're doing in practice is working.

Next meet -- Cloverdale travels to Tri-West at 4:30 p.m. today. North Putnam visits Monrovia for a triangular meet with the Bulldogs and Eminence at 4:30 p.m. Wednesday, Sept. 19.