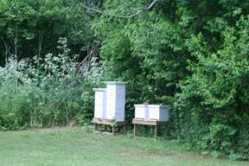 There is new evidence that a virus found in healthy Australian honey bees may be playing a role in the collapse of honey bee colonies across the United States and Europe.

The virus identified in the healthy Australian bees is Israeli Acute Paralysis Virus (IAPV) -- named that because it was discovered by researchers at Hebrew University.

Colony collapse disorder (CCD) has killed millions of bees -- up to 90 percent of colonies in some U.S. beekeeping operations -- causing issues for the crops dependent upon bees for pollination, such as oranges, blueberries, apples and almonds.

According to the U.S. Department of Agriculture honey bees are responsible for pollinating $15 billion worth of crops each year in the United States. More than 90 fruits and vegetables worldwide depend on them for pollination.

Signs of colony collapse disorder were first reported in the United States in 2004, the same year American beekeepers started importing bees from Australia.

The disorder is marked by hives left with plenty of food, few new adults, a queen, but no worker bees. Although worker bees in CCD vanish, bees infected with IAPV die close to the hive, after developing shivering wings and paralysis. For some reason, the Australian bees seem to be resistant to IAPV and do not come down with symptoms.

Scientists used genetic analyses of bees collected over the past three years and found that IAPV was present in bees that had come from colony collapse disorder hives 96 percent of the time.

The study was released last Friday on the Science Express Web site, operated by the journal Science that cautioned that CCD is probably caused by several factors.

Jeffrey S. Pettis of the U.S. Department of Agriculture's Bee Research Laboratory co-authored the study. He stated, ""This research give us a very good lead to follow, but we do not believe IAPV is acting alone. Other stressors on the colony are likely involved."

This may explain why bees in Australia appear to be resistant to colony collapse.

There have not been any reported cases of CCD in Australia. Researchers also say varroa mites affect all hives on the U.S. mainland but are not found in Australia.

Beekeepers believe the study offers a warning -- and hope.

"One continuing problem has been the inability to treat or vaccinate bees against viruses of any kind," said Pettis. " In the case of IAPV, there is evidence that some bees carry genetic resistance to the disorder. This is yet another good argument for beekeepers to use honey bee stocks that are genetically disease- and pest-resistant."