CLOVERDALE -- Volleyball fans got their money's worth Tuesday in the Cloverdale gym, seeing a four-game county rivalry match that was back-and-forth all evening.

Ultimately, it was the South Putnam Eagles who got the better of the Cloverdale Clovers in a big Putnam County match. The Eagles won 25-17, 26-24, 14-25, 25-23 to claim the Putnam County Paddle the Clovers won just over two weeks ago at the County Tournament. 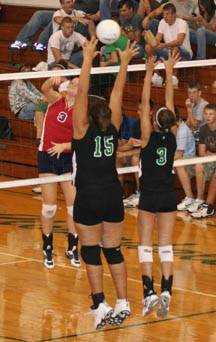 The Eagles came in with a big question mark in the middle, as senior setter Sam Stanifer was out with a knee injury.

"Sam, no doubt, that's a huge hit to our team," Eagle coach Jill Newton said. "She hasn't missed a minute. She's been on playing everything. We've had to make some adjustments to make."

Filling in for Stanifer is the combination of junior Kaleigh Miller and sophomore Megan Klotz. Newton was particularly impressed with the latter, who had been playing primarily with the junior varsity before Stanifer's injury.

"I think Megan Klotz has done a good job of coming in and stepping up. She's basically working with a brand new team," Newton said.

Maybe it was the desperation, but an Eagle team that looked like it could be overpowered by a deeper Cloverdale squad came out firing in the first game, taking an early 7-3 lead.

The Clovers had a run of their own, getting five straight points from Ashley Koosman to take a 12-10 lead.

However, the Eagles had more spurts in them, taking the lead on six straight from Klotz and reaching game point on five from Oceaia Boetjer.

"We had a really hard practice last night," Newton said. "We talked a lot about communication because we haven't been doing that, and I thought they just stepped up and played the game well tonight."

Game two was more of the same as the teams traded service early and longer spurts as the game wore on. With South up 19-13, Cloverdale put together five points to make it 19-18 Eagles.

From there, though, neither could hold service for long until the Clovers got three straight points to get game point at 24-23.

The Eagles got the side out, though, and two Boetjer serves later they were up two games in the match.

"I thought we got off to a real slow start the first and second games, just not talking and not hustling, and we played that way and it just looked that way," Cloverdale coach Kathy Moore said. "We forgot to do the small things, and when the game gets close, you have to do the small things to win the points. We didn't do them tonight."

In game three, the Clovers began to look like the team the coach wanted to see. The game was back and forth early, with South beginning to creep away with another game. But the Clovers retook the lead at 14-13 before South got a side out to tie the contest.

After getting a side out of their own, the Clovers turned to the service of Kaileigh Sparks. The sophomore put together 10 straight points, three of them ace serves, to close out the game. Two Eagle timeouts could not stop the bleeding, and the Clovers had taken game three, 25-14.

"I thought Kaileigh Sparks had a really awesome night serving and really kept us going. She did a really good job," Moore said.

The 11-0 run to close the game seemed to give the Clovers the momentum.

"I have to give us credit for coming back in game three," Moore said. "We played well. We were on. We were hitting the ball, crunching it, and that's the team that I'm used to having."

The Clovers kept the momentum early in game four, building a 9-5 lead on more service from Sparks.

But the Eagles hung in there, never letting the Clovers get out of reach. With her team trailing 13-9, Newton called her second timeout, and something seemed to click.

"To me it's black and white with our team. If the communicate, they play well. If they don't, they just go through the motions. They don't play. They're not aggressive. They're too passive," Newton said. "I was kind of worried there at the start of the fourth game because it seemed like we were still in that passive mode. But then after two time outs, they seemed to snap out of it and then bounce back, and I was really proud of them for it."

The Eagles didn't get it all back at once, but began playing better. The crawled back into the game a few points at a time, finally tying it at 21. The game was also deadlocked at 22 and 23 before South got a side out to give them match point.

In the final point, a pair of Clovers went up to block the spike of Brittany Burdge, but the ball fell between them and the net, giving South the game and match.

Afterward, the Clovers had the task of presenting the Eagles with the County Paddle.

"Am I disappointed? Yes. Do I like giving the paddle away? No," Moore said. "That paddle was hard to get in the first place, and to give it away is very distasteful."

The emotions were obviously different for Newton.

"Getting the paddle, to me, is one of the most exciting things about tonight because it's my fourth year as varsity coach, and we've never had the paddle for volleyball," Newton said. "I don't think South Putnam volleyball has ever had the County Paddle. I may be wrong about that, but to my knowledge they haven't."

"That is just another huge boost for our program to show that it is starting to turn around and go in the right direction, which is what we want," Newton concluded.

Moore agreed with Newton's assessment of the Eagle program.

"I have to complement South Putnam," she said. "They are a much improved team this year. Jill has really worked hard with them the last couple years, and I want to give them a lot of credit for hustling and picking stuff up."

The County Paddle will be at stake again when the Eagles travel to Greencastle at 6 p.m. Thursday, Oct. 4.