Study looks at the effectiveness of touch 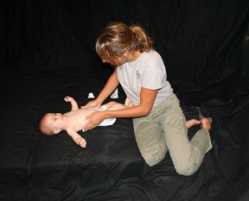 Greencastle massage therapist Amy Bennington performs an infant massage on 5-month-old Kaitlin Welker recently during filming for a TV documentary on touch. The massage was performed in the infant study lab at DePauw University.

A mother gently rocking her child to sleep.

Fingers dancing across the keys of a piano.

Most of us don't think about the concept of touch as we move about our daily lives. Often when we do, it is in the negative sense, as in child abuse.

But a DePauw University scientist is taking a deeper look inside the realm of touch and is formulating theories as to how it affects us in all stages of our lives.

Professor Matt Hertenstein, who has a doctorate in experimental psychology, agrees that society often thinks of touch in the negative sense, but he believes there is much more to learn about the positive effects and how they shape us later in life.

"I would argue that the pendulum has swung too far in the opposite direction," he said.

Hertenstein has written a number of articles during that past decade on the topic of touch, in addition to research studies that he is currently undertaking at his DePauw lab.

One of those studies involves two women sitting on opposite sides of a partition. The women can't see each other but are allowed to reach their hands underneath the partition.

One of the women is given a sheet of paper that contains a list of emotions that she is supposed to convey to the other person, using only her hands. The list of emotions includes anger, love, gratitude and more abstract feelings like surprise and embarrassment.

The woman on the opposite side of the partition has to figure out what emotion is being portrayed.

Hertenstein found that the women were able to successfully communicate a majority of the different emotions, save the more abstract ones.

Hertenstein arranged for the same study to be performed in Pakistan and Spain and the results were overwhelmingly the same.

"I hope this study makes people realize the power and impact that touch has on our lives," Hertenstein said. 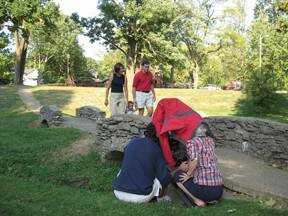 Film crews from the Canadian Broadcasting Company record DePauw Professor Matt Hertenstein along with wife Margo and son Isaac walking through Greencastle's Robe-Ann Park for a documentary on touch.

Another surprising principle that Hertenstein has learned through analysis is that touch, specifically massage therapy, can help a person experiencing depression in the same way as anti-depressant drugs.

The science behind the cure, according to Hertenstein, is that the same neurotransmitters in the brain that are stimulated by anti-depressant drugs are positively affected by massage therapy too.

"You're physiologically and mentally less stressed," he said.

Hertenstein's studies recently attracted international attention when a film crew from Canada traveled to DePauw to interview the professor and shoot scenes for a documentary on touch.

"Touch: The Essential Sense" will air on Canadian Broadcasting in January of next year and negotiations are currently under way to have the program aired in the United States - possibly on the Discovery Channel.

While in Greencastle last week, the film crew taped Hertenstein performing his experiments, including the one with the two women separated by the partition. They also taped a baby receiving a massage and DePauw students interacting with each other during their lunch break - all with the idea that touch affects different parts of our lives.

Taping wrapped up on Monday, but Hertenstein's research is ongoing.

He has concluded that touch plays an important role in the development of both animals and humans, recalling a published study in which a baby monkey was allowed to experience all the senses with his mother, except for touch.

Distinct behavioral differences were seen in the animal over time as a result of his being deprived of his mother's touch.

Hertenstein has not fully concluded the effects that a lack of touch with the mother can have on human children, but he believes a parallel may exist. He hopes his research will bring light to this and other issues related to touch as he continues with his research.

"It something we don't give much thought to," he said.