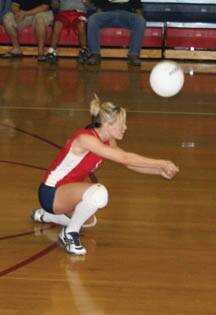 Shelby Johnston picks up a dig in Monday's loss to Northview.

South Putnam volleyball had a very tough match against a talented opponent Monday when it hosted Northview.

The Eagles struggled with serve receive against a Knights team that placed the ball where it wanted to all night. Ultimately, South Putnam lost 25-11, 25-9, 25-16.

The story in each of the three games started with the Eagles struggling with the service of Northview's Ashley Hull. The senior had 19 points and 11 aces on the night.

In game one, the Knights jumped out to a 4-0 lead on Hull's service.

Although the Eagles were able to get side outs, they struggled with their own service, not earning a service point until the score was 23-7.

At this point, they began to show signs of life, getting four straight points. The Knights were too close to finishing the game, though, and game one ended at 25-11.

Eagle coach Jill Newton was unhappy with her team's serve receive as well as the problem she always comes back to -- communication.

"We need to have better serve receive," Newton said. "Communication still needs to be better."

Game two was more of the same. Hull got the Knights out to a 7-0 lead, always placing the ball just beyond the reach of the South defenders.

The Knight's hitters did the same. While Newton gave Northview a lot of credit, she said her team gave away too much on the night.

"Northview's a good team, but we can't do things like give them serves just by missing them or letting them get ace serves because we just aren't going for the ball.

"We just need to communicate more and realize if they have a hit, it's a good kill sometimes," she continued. "We don't want to give points away."

The Eagles struggled throughout game two, getting only two service points. The Knights took game two 25-9.

In game three, four straight aces did the Eagles in early. While the Eagles were able to trade points with the Knights for a bit, several of these were against substitutes.

Still, four consecutive points from Megan Klotz drew them within six at 17-11.

A Shelby Johnston ace made the difference six again at 22-16.

However, a side out and two serves later, the Knights took the game, 25-16, to win the match.

It was a tough loss for the Eagles, but Newton is trying to get her team focused on the postseason at this point. They simply plan to move on.

The Eagles travel to Greencastle at 6 p.m. Thursday.