TERRE HAUTE -- With 7:24 to remaining in Monday's girls' soccer sectional opener, it looked like it could be panic time for the Greencastle Tiger Cubs.

Twenty eight seconds earlier, GHS had let hosts Terre Haute South tie the game at two by knocking a goal into their own net. 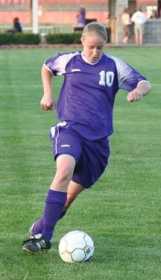 Greencastle's Hannah Spencer beats the Terre Haute South defense up the sideline to a ball in the second half. Spencer had all three of Greencastle's goals in the 3-2 victory.

Now Grace Fisher, a senior who already had an assist in the game, was lying on the grass with a shin injury. It looked like it could be a rough last seven minutes.

Instead, less than a minute later, Hannah Spencer did what she had been doing all night -- beating the Terre Haute South goal keeper.

The goal came with 6:32 remaining, just after three players -- two of whom were Spencer and goalie Lauren Hayes -- collided in front of the goal. Fisher was the first of the three back up and to the ball, which she put past Terre Haute South's Ashley Liffick. Spencer's third goal of the night, it put GHS ahead 3-2, a lead they would hold until the end.

With the victory, GHS moved its record to 12-2-3 and advanced to the semifinals of the Terre Haute South Sectional. They will face Sullivan at 5 p.m. Thursday. The Golden Arrows beat the Patriots 3-0 in Monday's second game.

"It was tremendous," GHS coach Maurice McKee said of the final goal. "Our own goal didn't help us out, but we recovered. I'm tickled to death that we recovered like we did. That's what we need to do and fight it out all the way to the end."

Although Terre Haute South threatened down the stretch, the Tiger Cub defense prevented them from getting any more really good looks at the goal, something they had done much of the night.

"The defense kept them ate up, pretty much," he continued. "They knew who they had to mark and kept them under control. What they did get off on us were some good shots."

In the first half, the teams traded ball control throughout, with the Braves getting more shots, but the Tiger Cubs making more of theirs. Although they had only three shots on goal in the half, Spencer put a shot past Hayes with 30:51 remaining to put GHS up 1-0.

While Terre Haute North had more shots than the Cubs, the defense was strong, and GHS keeper Micki Ehrhardt had to make three saves in the half.

The second opened with the Braves on the attack early. The Tiger Cubs continued to hold them at bay and began to regain control of the momentum near the 20 minute mark.

At 19:21, Spencer took a pass from Fisher and put it through for her second goal of the evening.

Undaunted, the Braves came right back to score their first goal with 17:07 to go. Gabi Roach found the net on an assist from Kayla Liffick.

It looked like the scoring would end there until the own goal from GHS tied the game.

But the Tiger Cubs, especially Spencer, found a way to pull it out.

"We knew we had to play really hard coming into this game," McKee said. "We tied them 1-1 in the regular season. We knew it was going to be a hard game. I told Coach Weltz when we walked in the gate, 'This should be the final game, not the first game,' and he agreed with me because he knew what it was going to be like.

Advancing to face Sullivan, the biggest uncertainty for the Tiger Cubs is Fisher's health.

"I'm very pleased. Hopefully Grace is not in too bad of shape. She got kicked real hard right at the shin, through the shin guard, and it started swelling, so we'll see what happens there."

Next match -- Greencastle will face the winner of Terre Haute North and Sullivan at 5 p.m. Thursday.