Cougars end season with loss against Cadets at Tri-West 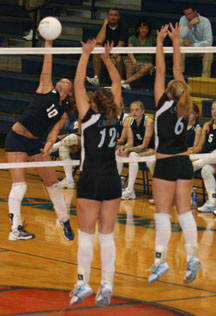 LIZTON - For each of the first two games Thursday night, the North Putnam volleyball team had Cascade were they wanted them.

While neither team had exerted much dominance through two games, the Cadets had gotten the points when they needed them. They rode that momentum to a 25-19 win in game three and a three-game win to advance to the semifinals of the Tri-West sectional.

It would have been easy for North to quit after the way they lost game one. Having trailed early, they clawed their way back into the game to trade the lead with Cascade several times. The Cougars eventually put together a couple of small runs to get game point at 24-19.

However, the Cadets got the side out and then ran off four straight service points to tie the contest.

Twice more, North would take the lead, only to have the Cadets tie it back up. Eventually, Cascade’s Morgan Estes ran off two points to give the Cadets game one, 28-26.

In game two, Cascade got up 24-20, only to let the Cougars storm back into the game. The Cougars actually took a lead at 25-24 behind the service of Logan Doyle, but were unable, once gain, to close the game out.

Neither team could close it out, though. The two teams traded service until Cascade took a 31-30 lead on a net serve from the Cougars. A service ace later, the Cadets were up 2-0 in the match.

“The first two games were close games. We should have won them,” Spencer said.

“We just really didn’t finish the game when we had them,” she continued. “We’ve just got to give it to Cascade for being able to come out and still be aggressive even when they’re behind.”

North got an early 6-3 lead in game three, but Cascade came back to take a 9-7 lead and never really looked back. They built it to 15-8 and ultimately closed out the Cougars, 25-19.

Although they had struggled in the match, Spencer had much praise for her team.

“It’s easy when you get down on teams or you lose really close games to just give up and say, ‘Let it be done.’ My girls just don’t play like that, and I appreciate that,” she said. “It makes them a lot easier to coach. When they have fire it gives you fire.

“I’ve really enjoyed this group of girls,” Spencer continued. “They’ve been fantastic to work with and good people to be around. I wouldn’t want to be around other people. They were just fantastic.”

Thursday’s match was the last for Cougar seniors Kacy Wendling, Kayla Green, Ashley Doyle and Tippany Tippin. Spencer said these four really set the tone for what she has enjoyed so much about this team.

“The seniors are going to be hard to replace. They’re the ones who bonded it together and kept it positive every day. They included everybody and made sure they were all working together.

“Every day was intense,” she added. “Every day people wanted to get better, wanted to learn. I can’t say that about every team that I’ve coached, but certainly this team was one of those kinds of teams.”