CLOVERDALE - When the buzzer sounded at the end of Friday’s sectional match-up between Cloverdale and Cascade, the Clovers fell to the Cadets by a meager three points. As the Clovers huddled up for their final talk of the season, no one could deny that the players had left their hearts on the field.

With less than two minutes remaining in the game, the Clovers had a final play that would decide the fate of their season. Cloverdale took the line, snapped the ball and ran the ball up the gut but came up one yard short of continuing their push for a sectional championship.

“You give it to your senior going behind your two biggest guys and you expect to punch it in for a yard. It’s a hard one to swallow,” Cloverdale head coach Kyle Winkler said.

As the game started, Cloverdale pushed the ball down the field, converting a fourth down possession and capped a 54-yard drive with a pass to Chad Cummings from Jordan Hayden with 9:46 on the clock. After a two-points conversion the Clovers were up 8-0.

The momentum shifted quickly on the ensuing kickoff.

Cloverdale’s Raine Young kicked the ball deep to Cascade’s Ozy Riley, who after receiving the kick, raced down the home sideline and scored on an 85-yard kickoff return. The Clovers held to an 8-7 advantage. 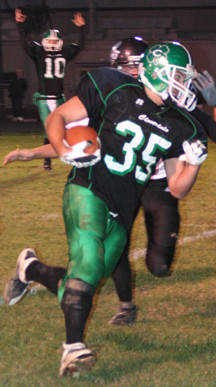 Senior Aaron Dayhuff rounds the corner for a first-quarter touchdown, as quarterback Jordan Hayden (10) celebrates in the backfield.

Cloverdale scored on its next possession, keeping the ball on the ground for a total of 72 yards. Aaron Dayhuff scored from eight yards out, putting the Clovers up 16-7.

Cloverdale seized the momentum once again in the second quarter as the covered a Jason Quinn fumble, then marched the ball down the field and tacked on another touchdown when Dayhuff changed direction, taking the ball up the left sideline for a 43-yard score.

Cascade scored just before the half as Conner Guthrie drove the ball in from one yard out, making the score 24-18 at the half.

“We spotted them the first seven points by just letting them running up the sideline. We tried to roll coverage and run different coverages against them,” Winkler said. “He’s (Guthrie) a duel threat. They nickel and dimed it all the way down the field.

“We had him in the backfield many times and he just chucks it off two or three times. One kid caught it at the one yard line. It was just unbelievable some of the stuff that happened tonight,” he commented.

The Clovers held the Cadets to a three and out to start the second half but a superb punt from Joel Fisher pinned Cloverdale on the two yard line.

Three plays later, Cascade put two more points on the board when a bad snap resulted in a Cloverdale safety.

On their next possession, the Cadets took their first lead of the game as Guthrie took the ball in from five yards out, giving Cascade a 27-24 advantage.

The remainder of the game was a slugfest between the two squads as they traded scores.

Levi Boller gave Cloverdale the lead back with 1:35 in the third quarter, sliding through the Cascade defense to score a 21-yard touchdown. The Clovers lead 32-27 going into the final quarter.

The Cadets wasted little time taking the lead for the final time as they scored five seconds into the quarter, bringing the score to its final count of 35-32.

Dayhuff lead the way for the Clovers, rushing for 143 yards and two touchdowns. Keeping it on the ground as the game plan for the Clovers and it almost pulled them through.

“We put it on our linemen. We said we were going to go with Dayhuff. We’re going to run behind our five linemen. He ran hard and ran kids over. You couldn’t ask much more from a guy,” Winkler said.

Winkler commented on the play of his seniors. He acknowledged their leadership off the field as well as on and hopes the example they set would motivate his younger players to do the necessary things to improve themselves during the off-season.

“The seniors really stepped up for us,” Winkler commented. “I hope they (young players) realize they need to hit the weight room. It has to be their number one priority. We get that in line and things are going to come together here in Cloverdale.”

The Clovers close the season with a record of 3-7.

The Clovers close the season with a record of 3-7.