The Danville football team came out firing Friday against Greencastle, building a lead with a passing attack the likes of which the Tiger Cubs had not seen all year.

With the lead in hand, though, the Warriors proved just as lethal on the ground. 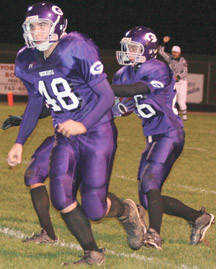 Junior Andrew Birt (right) seeks a block from Kyle Nobles and another teammate on a kick return. Birt picked up some key yards for the Cubs Friday on receptions, kick returns and one interception return.

The Warriors rushed for 267 yards and passed for another 263 as they defeated the Tiger Cubs 42-10 in the opening round of IHSAA Class 3A Sectional 31. The Cubs finish the season 4-6.

“We played a good football team tonight, but we didn’t stop fighting until the end of the game,” GHS coach Mike Meyer said.

For their part, the Cubs were able to move the ball at times in the first half but the defense was unable to stop the Warriors. In the second half, the Warriors adjusted to stop the Cubs completely, while using their running game to basically hold the lead.

After Fran Thurston scored on a four-yard reception on Danville’s opening drive, the Tiger Cubs came back with a scoring drive of their own.

Quarterback Graham Shuee went 4-of-7 for 41 yards on the drive, including a diving 12-yard catch from Kyle Nobles to keep the possession alive.

Buzz Deer capped it off with a 35-yard field goal.

The Danville offense, could not be stopped, though. Cooper ran for a 15-yard touchdown as time expired in the first quarter. He then found K.C. Woods for a 34-yard touchdown pass with 8:06 left in the half and ran for another 7-yarder with 3:18 remaining.

The backbreaker for the Cubs came on the first touchdown not involving Cooper on the night, a 73-yard scamper by Andrew Lehr to put the Warriors up 35-0.

Each of Danville’s touchdown drives on the evening was punctuated by a kick from Kyle Fox, who was a perfect 8-for-8 on extra points.

Just when it looked hopeless for the Cubs, though, the passing attack found life again.

The Tiger Cubs recovered a Warrior fumble late in the second to take over at the Danville 42. Shuee found Ashton Marshall for 16 yards for a first down. He then connected with Andrew Birt at the 6-yard line with 6.6 seconds to go.

On the ensuing play, Marshall made a nice grab on the left sideline of the endzone with 2.5 seconds remaining. A Deer kick made it 35-10.

The Cubs recovered an onside kick to get one shot down the field with 0.5 seconds remaining. Shuee went for Marshall on a play that looked to be pass interference by the Warriors, but the call was not made.

The half ended with Danville leading 35-10.

The Tiger Cub offense never found itself again the second half, and the Warriors were content to run the ball and hold on to their lead.

Birt made a nice interception and return for the Cubs with 7:55 to go in the third, but two plays later, Danville’s Logan Clark made an interception of his own.

The only score of the second half came on another rush from Cooper, this one for 5 yards with 10:25 to go in the game.

The game ended with Danville winning 42-10.

“I’m obviously disappointed with the loss, but I’m pleased with the effort we got from the kids. We moved the ball and did some good things,” Meyer said. “They (Danville) are a very good offense and defensively they gave us more than we could handle.”

For the year, Meyer was pleased with a team that started with very little experience. They came a long way from their 0-3 start, winning three straight before running into the fifth-ranked Warriors.

“We came a long way from the first game. The kids finished strong,” Meyer said. “I’m proud of the kids.”

The coach had good things to say about his departing seniors before moving on to his hopes for the coming year.

“We have a great group of seniors, they work very hard,” Meyer said. “I’m looking forward to a good offseason, and an even better year next year.”

Greencastle closes the season with a 4-6 mark, while the Warriors move on to face Crawfordsville next Friday.