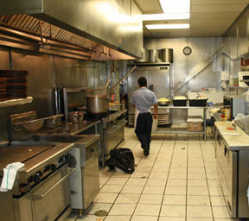 The kitchen at La Charreada restaurant in Greencastle was cleared to reopen after health officials confirmed a deer was being gutted there earlier in the week.

La Charreada was packed with customers Friday evening, just hours after the Board of Health allowed the restaurant to reopen after inspectors closed the restaurant down when they found a deer carcass in the kitchen.

This is the second time the Board of Health has closed the Greencastle Mexican restaurant in three years.

Putnam County health inspectors cited the restaurant at 1360 Indianapolis Rd. for bringing a deer into the kitchen and butchering it, using food obtained from an unapproved source, not protecting the food in the kitchen from contamination, allowing the employees to handle the deer and allowing business to continue in the presence of a "gross unsanitary occurrence and condition," according to the inspection report.

Socrates Montano, a district manager and member of the family that owns La Charreada and 32 other Mexican restaurants in Indiana and Arkansas, said the employees who were responsible for bringing the deer into the restaurant have been fired and that the kitchen has been thoroughly cleaned since the carcass was removed. He denied that the employees butchered the deer in the restaurant.

Inspectors said they showed up at La Charreada Wednesday afternoon after they received a complaint about the carcass, said Environmental Health Specialist Darrell Brackney. Montano said the complaint came from an electrician who happened to be in the kitchen at the time.

When they arrived, they found "a few" people, presumably employees, standing around a gutted, headless, skinned deer carcass that was lying on the floor, Brackney said.

Montano said Department of Natural Resources officers who were friends with one of the employees brought the deer, which had been hit and killed by a car, to the restaurant at the request of the employee. That employee and another then carried the deer into the kitchen.

At no point did employees intend to serve venison from the carcass to customers, Brackney said. The employee was, however, butchering the animal on the floor and large pieces of meat had been cut from the carcass, said Brackney and Board of Health Administrator Beth Glaze, both of whom took part in the inspection.

"That is a lie," Montano said of the health department's assertion that employees were butchering the deer.

He said he was not in the restaurant Wednesday, and maintained that the employee was just storing it until he could bring it home..

Brackney said they shut down La Charreada on the spot because it was an "imminent threat to public health."

This was only the fifth restaurant closing in Putnam County that Glaze has seen in her nine years at the Board of Health, she said.

It remained closed for the rest of the day Wednesday and all of Thursday before reopening Friday afternoon.

Health inspectors talked with the owners of the restaurant and made them throw out all food that was in the kitchen when the deer was brought in. They also reinspected the facility before allowing it to reopen.

As a result of the health code violation, La Charreada will be on probation for six months, during which time health inspectors will visit the kitchen once a week to make sure it is staying within health code. The owners also face a fine for the infraction, though the amount has not yet been determined, Glaze said.

In response to the violation, owners fired the two employees who brought the deer into the kitchen and are reviewing security camera tape from the kitchen to determine whether the manager should be fired as well, Montano said.

Both men were waiters and were not responsible for preparing food, he added.

Douglas S. Ehman, a Public Health Coordinator for the county who took part in the follow-up inspection, said he is confident that the restaurant is safe to eat at and that there are no particular precautions that anyone who dined there Wednesday needs to take.

Despite this, Glaze said she would have reservations about taking her family there to eat.

"They would have to gain my trust again because they've lost my trust," she said.

Diners walking into and out of La Charreada Friday evening seemed to take the restaurant's closure in stride.

Doug Elkins and Lyndsay Higgins, who were about to enter La Charreada, said they were unaware of the restaurant's health code violations, but they shrugged off the news and decided to eat there anyway.

Comments
View 26 comments
Note: The nature of the Internet makes it impractical for our staff to review every comment. Please note that those who post comments on this website may do so using a screen name, which may or may not reflect a website user's actual name. Readers should be careful not to assign comments to real people who may have names similar to screen names. Refrain from obscenity in your comments, and to keep discussions civil, don't say anything in a way your grandmother would be ashamed to read.
Respond to this story