SPEEDWAY -- With a rushing attack that has carried the load for North Putnam all season, the Cougar offense did something surprising Friday night -- they threw for all four of their touchdowns.

Quarterback Griffen Dahlstrom was 9-for-12 for 229 yards and four touchdowns to lead the second-ranked Cougars to a 27-14 win over Speedway and an 11-0 record. North will face Monrovia in the Sectional 30 final next Friday.

North Putnam junior Griffen Dahlstrom led the Cougars in their victory over Speedway, 27-14 Friday night. Dahlstrom threw for 229 yards and four touchdowns. The Cougars will face Monrovia for the sectiional title on Nov. 2

"It would really shock people, having seen this football team all year long, to come in here against a team with this type of athletes and to have had four passing touchdowns," Cougar coach Dave Pasch said. "It's something we knew was there all year long. People have doubted us, but our kids believe in us, they believe in this system. And we've always got that defense back there that we can hang our hats on."

Friday's showers cleared off just in time for the game, but left the players with a very slick playing surface. While it may have had an effect early in the game, as both teams were scoreless for the first quarter, the Cougar receivers had little trouble hanging on to the ball.

On the first play of the next period, Dahlstrom really began to find his passing touch, as he hit J.T. Francies across the middle for a 20-yarder to set the Cougars up first-and-goal from the 8.

Two plays later, Rooker slipped unnoticed out of the backfield on a pass play, and Dahlstrom found him to put the Cougars up 6-0. It was a play North would run twice and pick up touchdowns each time.

"They had a lot of film on us, and that was something that we hadn't run all year. We rough it out, and we save it for time we need it," Pasch said.

A missed Rooker extra point kept the score at 6-0.

Speedway came right back, though, with Calvin Harris taking the ensuing kickoff to the Cougar 6. The sophomore bobbled and kicked the ball on the return, but got a fortuitous bounce and proceeded right through the North coverage.

Three plays later, Jaron Avance scored the Sparkplugs first touchdown. A Courtney Walton kick put the Plugs up 7-6 with 8:56 to go in the half.

The Cougars were not to be outdone, though. On the third play of their next drive, facing a third-and-22 from their own 18, Dahlstrom once again found Francies deep across the middle.

Only this time, the Cougars had a little luck of their own. The defender hit Francies immediately and slid off. Francies raced the remainder of the way for an 82-yard touchdown. 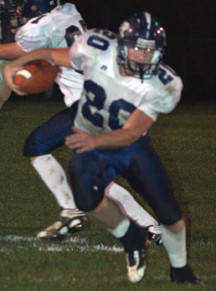 Rooker ran in the two-point conversion to make it 14-7 with 6:58 remaining.

Speedway turned the ball over on downs, and the Cougars were back in business. This time, they took six plays to score, with Dahlstrom hitting Jerrett Ban for a 43-yard touchdown pass with 2:47 remaining. Rooker's extra point kick was good this time.

After a scoreless first quarter, the Cougars led 21-7 at the half.

The early part of the third featured some of the same good defense as the first quarter. The teams traded punts until the Plugs took over at their own 48.

They parlayed the good position and some good passes from Ethan Bartel to J.T. Bouwman into a scoring drive, with Bouwman making a very nice catch at the back of the end zone.

At that point, the Cougars put the game out of reach with the kind of offense that has carried them all season. They embarked on a clock-eating drive of 15 plays and 69 yards that did not end until 5:46 to go in the game.

At the end of the drive, Dahlstrom once again found Rooker on play much like the one that opened the night's scoring. A missed PAT made it 27-14.

"We haven't had to throw the ball all year long, and I think it's fairly ironic that tonight we scored four touchdowns throwing the football. Our mode is running the ball," Pasch said. "It's part of the system. We've got a lot of athletes, and you put them in places and they have to defend them.

"It's one of those things we haven't shown all year long, and they probably hadn't talked much about it," he continued.

The Sparkplugs would get two more possessions, but could mount no more serious threats.

"Sometimes to win big games, you have to make big plays. We made our share tonight, and, unfortunately, I think, gave them up," Pasch said. "We didn't turn the ball over and played great defense."

No one came up with bigger plays than Dahlstrom who led the team in passing (229 yards), rushing (59 yards) and tackles (8). Kyle Alcorn and Adam Vondersaar also picked up eight tackles apiece for the Cougar defense.

"When you get to this point in the season, you have to have some balance," Pasch said. "You have to be able to run the football, play some defense and do everything in all three phases of the game and execute. It boils down to execution. We executed exactly what we had practiced all week."

For practice in the coming week, the North Putnam will prepare for Monrovia, who defeated Cascade 43-10 Friday. The Cougars defeated the Bulldogs 28-0 in the regular season.

"We're going to go back to work," Pasch said. "When you start talking about a long-term vision, the vision includes next week. But at the same time, we have to get better every week in practice. Our kids believe in that and they're going to come back Monday and do what needs to be done."

Also part of the long-term vision is getting healthy. Pasch knows his players have to be injury-free as the tournament run grows deeper. He feels good about where they are, even after a physical contest with the Sparkplugs.

"This was a very physical game, and it's going to be critical for us to get back and healed up," Pasch said.

It's a juggling act for any coach this time of year. They need keep the players motivated the bigger vision of the tournament, while making sure to take care of business in the game at hand.

"I'm proud of what our kids have been able to accomplish, and hopefully we can play another couple of weeks," Pasch concluded.

The Cougars travel to Monrovia at 7 p.m. next Friday for the Sectional 30 final.

Next Game: The Cougars (11-0, 6-0 WCC) travel to Monrovia at 7 p.m. next Friday night to play the Bulldogs in the Sectional Championship game.