DePauw -- Moore of the same 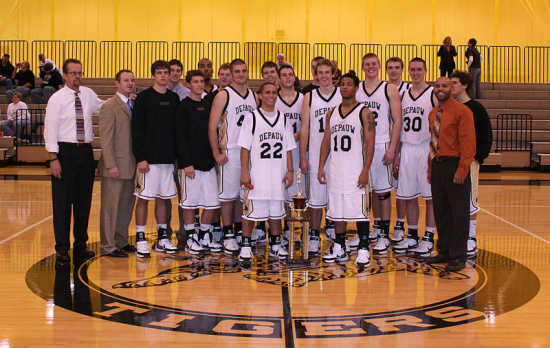 Moving to 4-0 on the season, the DePauw Tigers men's basketball team defeated the University of Chicago, 81-67, Sunday to capture its third straight Mike Rokicki Community vs. Cancer Challenge title.

It no secret, DePauw has a roster filled with talented shooter, but on Sunday defense was their key to success. 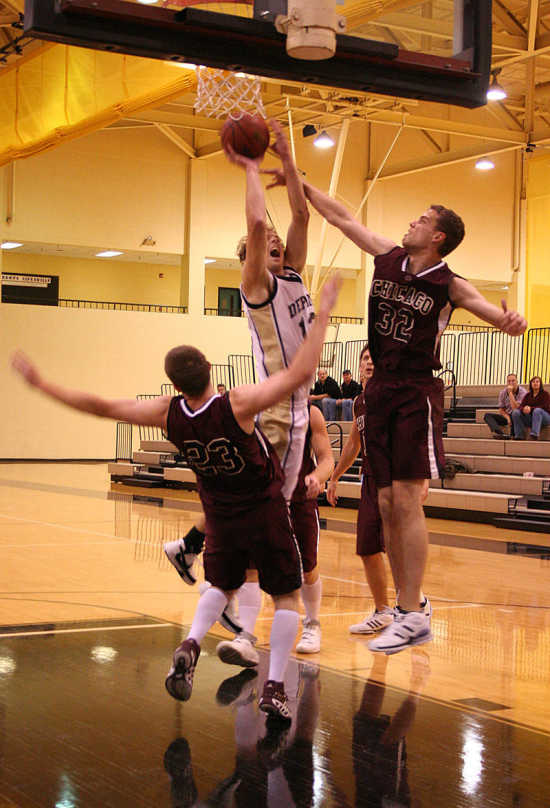 DPU sophomore Tom Callen drives to the hoop during Sunday's game against the University of Chicago. Callen and the Tigers captured the Mike Rokicki Community vs. Cancer Challenge with the 81-67 victory.

The Tigers came to the court with much more intensity than they exhibited in their first-round game against Marian. Quick feet and good communication made it possible for the Tigers to block cuts and position themselves to control the game early -- which they did.

"The Key to the game was our defense," DPU head coach Bill Fenlon said. "We've got some ways we can score. We have so pretty talented offensive players and our big thing is to get better defensively for those nights when we can't outscore them. I thought we were better defensively tonight. The way we started the game was really good.

"We got into a little foul trouble because we were being so aggressive, and then we cranked it up again in the second half. That's a big deal for us. I thought today was a good indication of the way we can get to a point where we don't have to rely on outscoring our opponents," Fenlon commented.

The Tigers jumped out to an 18-9 lead, with Ryan Werntz, Steve Leasers and tournament MVP Mike Moore providing big shots from three-point territory. In fact, DPU shooters made it rain from long distance throughout the tournament, connecting on 51 percent of their shots from long range.

Just as it looked like DePauw was going to run the Maroons off the court, Chicago began a 13-3 run to end the half. A Moore three-pointer at the buzzer was DePauw's only scoring during the final five minutes of the half. DePauw led the Maroons 29-28 at the half.

If there was any doubt who the dominant team of the tournament was, DePauw quickly put those doubts to rest in the second half.

DePauw stormed out of the locker room and took a 12-point lead with just over a minute off the clock. The Maroons made runs at the Tigers for the remainder of the game, but never really challenged for the win. The Tigers scored the game final six points, finished off by a Werntz three-pointer with 39 seconds remaining.

The DPU bench outscore Chicago 18-10, a fact that Fenlon talked a length about. Coming off a game where he felt his bench didn't show him enough, Fenlon was more than happy with their efforts on Sunday.

"I wasn't really pleased with it (bench) last night. I felt we dropped off a bit. Tonight I thought it was really good. I thought David gray was really active coming off the bench. Tony (James) was settled down a little bit. Steve LeMasters gave us good minutes and Trevor stone gave us some good minutes. Eric Hagen came out and gave us just a few minutes, but they were big minutes for us. Everybody wants to play more but every minute matters," Fenlon said.

A solid player for the Tigers in this young season is sophomore Tom Callen. Callen saw limited action last year and has made a positive impact thus far during this season. Callen is a player; those craving more playing time, should look at. Through hard work, he has worked his way into the starting lineup and has given the Tigers another offensive weapon to add to its arsenal. When asked about Callen's play, Fenlon acknowledged the diligence of the sophomore guard.

"He's athletic, he can drive the ball to the basket and he plays hard. We have five guys on the bench who aren't really playing; they're not ready to play. They don't know enough about what's going on, they don't know how to play hard; they just haven't figured it out yet. I think they're talented enough and Tom's a perfect example of that. I think he was talented enough to play and help us last year but he really wasn't ready to come out and execute and now he is. He's been around it (the program) a year and he hung in there. He had a good summer and he worked at it," Fenlon commented.

Senior Stephen Schott and Moore were named to the All-Tournament team.

The Tigers will travel to Centre at 3 p.m. Saturday.

Next game -- The Tigers will travel to Centre at 3 p.m. Saturday.