Eagles looking ahead to County after powering past Cougars 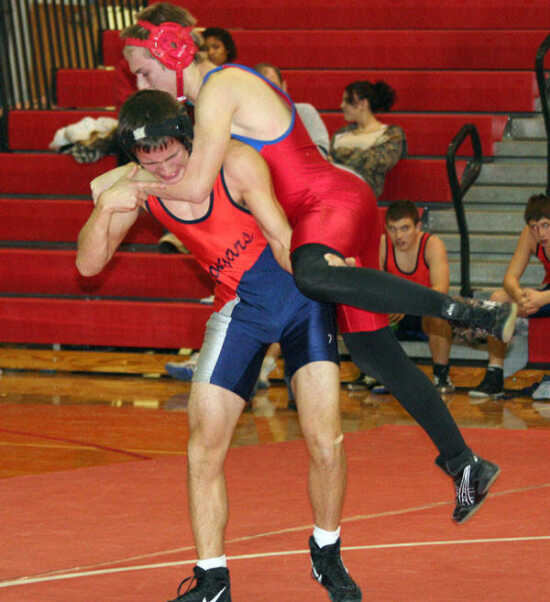 Just a week before the County Championships, the North Putnam Cougars and South Putnam Eagles wrestling squads squared off against each other Wednesday. The Eagles were victorious, 44-30 over the Cougars.

"I thought our guys did really well. They worked with each other, talked to each other and they listen to us. I was very pleased with them," South Putnam coach Todd Crosby said.

Through the first four weight classes, the teams were tied up at 12-all due to two forfeits each.

North was first to record a pin as Bren Donaldson did in the 130 class. The Eagles responded quickly as Seth Green pinned Keegan Foltz with 51 seconds left in the second period to capture 135.

South Putnam wrestlers D.J. Adams and Logan Kinney won the 140 and 145 classes with pins, but after Kenny Quisenberry won the 152-weight class and B.J. Brewer received a forfeit victory, the teams were knotted at 30-all entering the 189-weight division.

The Eagles' Josh Sanders received a major decision by defeating Jim Davis 14-4 to take the 189 classes. South Putnam won the final two weight classes, the 215 and heavyweight, to seal the victory. Chris Hurst won the 215 by major decision and Mike Migliano captured the heavyweight class with a first period pin.

After the match, North Putnam coach Kenny Kerns expresses his disappointment in his team's performance. He pointed out the fact that every available man was wrestling and some individual were moved around to fill holes.

"I thought Quisenberry's match was a good one. I thought Bren Donaldson came through. He listens pretty well," Kerns said. "I'm a little disappointed in my upper weights. I'm really disappointed as a matter of fact. Maybe it will click one of these days."

When asked to pinpoint what he believed to be holding his upper weights back, Kerns wanted his kids to be more active.

"(They need) More hustle. Not getting pinned. They are just way too slow. We're not doing any different moves -- we're falling in love with the same moves and we just stalling out," Kerns commented.

Crosby on the other hand was happy with his team's performance on the whole. He echoed coach Kerns' need to fill holes and have his wrestlers maintain their mat weights.

"We had a couple of guys that we're just making sure they can get their weight situated," Crosby said. "They didn't get to wrestle. Overall I thought it was a great night for both teams."

He also talked about his team preparation heading into the county championship next week.

"It's always individual, so you have certain ones that they really need to work on when they're down," Crosby observed. "If they are on bottom, they need to know what to do to get out and do it quickly. We have a couple of them need to not be so timid on they're takedowns. So it's just tweaking their individual things that they do.

"I think it's going to be very tough," he concluded.

Both North Putnam and South Putnam will compete in the county meet at Cloverdale beginning at 5:30 p.m. Thursday