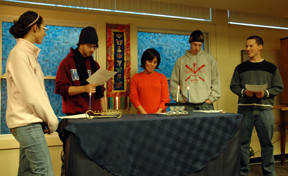 Hanukkah begins on the 25th day of the Jewish calendar month of Kislev every year and ends at sunset on the eighth day.

The event, also known as The Festival of Lights, is not biblically prescribed, but commemorates the historic victory of a small group of Jewish rebels, known as the Maccabees. The rebels overcame the Greeks during the Hellenistic Period, said Rebecca Schindler, Associate Professor of Classical Studies at DePauw University.

Under Greek control, Jews were slaughtered and the practice of the religion was effectively outlawed.

After driving the enemy from their lands in 165 BC, saving the Temple on Jerusalem's Mount Moriah, the rebels attempted to light the Temple's eternal flame but found just a one-day supply of oil. The event is celebrated because that oil continued to burn for eight days -- just long enough for new olive oil to be made.

The lighting of eight candles commemorates each day that the miraculous oil burned, but also is said to symbolize the Jewish people's emergence from darkness brought on by oppression, into the light, said Assistant Professor of Religious Studies Russell Arnold.

The holiday is rich in symbols. Among them, the dreidle, a four-sided top that teaches an abridged history of Hanukkah. One Hebrew character is painted on each face of the dreidle to spell out the phrase: A great miracle happened there, said Schindler, referring to the Temple of Jerusalem.

"Hanukkah is not the most important Jewish holiday," said Schindler, "but it has gained importance in the modern era because it falls in the winter months, close to Christmas."

"The holiday has evolved differently in different regions of the world," Schindler explained, pointing out that the tradition of giving a gift on each of the eight days of Hanukkah is a distinctively American tradition.

Because the event commemorates a historical event, there is no traditional synagogue service for Hanukkah. Instead, it is often observed as a family celebration with blessings said over the lighting of a candle each night.

Members of the Jewish student group, Hillel, plan to meet every night at sunset to observe the holiday at DePauw University's Spiritual Life Center, in Anderson Street Hall, and welcome the community to attend.

Hillel will also host a more traditional Hanukkah dinner at 5:30 p.m., Friday where they will serve foods traditionally associated with the holiday such as latkes, or potato pancakes, and jelly-filled doughnuts, both fried in symbolic oil.