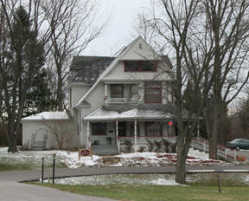 Barring a "miracle," one of Greencastle's most prominent addresses will be vacant in the next six weeks.

Stonebraker said she is searching for a new location where she can reopen, though it's all still up in the air at this point.

However, the thought of leaving the sprawling Victorian-style house on the hill is gutwrenching, she said.

"No matter what I find, It will never have the charm of this house any place else," she said.

Stonebraker's financial troubles began in 2005 when she paid to move a second house to the property and opened a bed and breakfast.

Her spa business has been doing well and even growing, but lagging traffic at the bed and breakfast has caused her to default on her mortgage payments.

Since September 2006, before the bed and breakfast even opened, seven tax warrants have been filed against Victorian Day Spa. The suits have sought to collect back taxes that Stonebraker owes, some were for hundreds of dollars, one as much as $4,200.

Stonebraker has since made good on all but two of those cases.

She filed for Chapter 13 bankruptcy protection this summer and avoided a sheriff's sale of the property that was scheduled for late June, but the bills just kept piling up, she said.

When she started the bed and breakfast, she hoped to cater to visiting parents of DePauw University students and eventually even make Greencastle a destination for the niche travelers looking for cozy, scenic places to stay.

The venture could be profitable, she just can't stay ahead of the mortgage payments until it does, she added.

Stonebraker said she still holds out hope that an investor will buy the property and allow her to lease the salon, but she's unsure what those chances are.

When she paid to move the massive house from DePauw University's campus in 2002, the plot it now sits on was just vacant land. Her vision was to create a spa and salon that could give weary Putnam County residents an escape from daily rigors.

In less than six years, she built a client base of more than 5,000 as she worked long hours as head cook and bottle washer -- managing the fledgling business, cutting hair and doing everything in between, she said.

Stonebraker said her business is not the only one struggling in Greencastle. The consensus at a recent meeting of several business owners in town was that slow decay and the slow economy have left many of them hanging onto their shops by a thread, she said.