CLOVERDALE -- Seven schools converged on Cloverdale for the West Central Conference Wrestling Championship Saturday, a day that proved to be one of blood, sweat and tears -- literally. Cascade took the overall title but strong showing for county schools and a first for the WCC highlighted a heated day of wrestling action.

Greencastle was the counties highest scoring team with a total of 143, with Cloverdale edging out South Putnam for third place with 135 points. South was fourth with 131 and North Putnam finished seventh on the day with a total of 66 points.

The Tiger Cubs were the epitome of the word team Saturday, proving that third place is as important as first. Greencastle saw six wrestlers finish third in addition to its one second place finisher. Jesse Vermillion at 145 and Jacob Wright at 189 were Greencastle's WCC champions.

"I'm happy about it. Now we just have to put a full day of wrestling together instead of coming on strong at the end," GHS head coach Matt McComish.

Vermillion tore through the 145 weight class, knocking off top-seeded Mitchell Judkins of Speedway en route to his championship win. Wright won the 189 class by defeated South Putnam's Josh Sanders. After getting Sanders into position, Wright wrapped him up and took the victory with less than a second remaining in the period.

"We have two matches next week and then the next week after that we'll work on getting people healthy and get ready for sectional. We'll work on our conditioning. We're a young team so we have a lot of kids that haven't seen sectional yet. We'll have to work on all three to compete," he added.

GHS moved into second place after coming into the final round of competition ranked fifth in points. 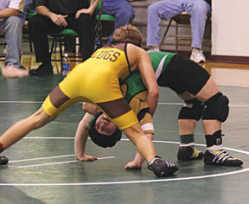 Along with the Clovers' two WCC champions, Cloverdale had two wrestlers place second, three in third place and one fourth place finisher to help the Clovers secure third place on the day.

"I thought there were guys that did very well and I was really proud of and then it seemed like we were just two different teams. One half of the team really wanted to be out there and wanted to win; the other half not so much," Cloverdale head coach Brian Siddons said.

Brittney Hughes became Cloverdale's first champion of the day as she took the 103 title with an 8-3 decision over Speedway's Aaron Campbell. Using superior technique, Donnie Helterbrand earned a major decision, 15-6, over Monrovia's Tanner Sizemore to win the 112 pound title.

In one of the most intense match-ups of the day, Lee Secrest fell to Cody Blackburn of Cascade in the 160 weight class. Secrest, down by two, fought diligently throughout the third period and was in position to gain a reversal to tie the match at eight. But as it looked as if Secrest held an advantage, the buzzer sounded ending his day.

"It was kind of a disappointing day on the whole," Siddons said. "Cascade wrestled really well, Greencastle came back there at the end and we didn't hold on to matches that we should have won. It just seemed like we came in today and didn't wrestle well. I don't know if there's a real good explanation for that."

In another inter-county championship match, the Eagles' Ben Parker defeated Greencastle's Kyle Buchanan to nab top honors at 215. Even more impressive, Parker took the top spot after sitting out his junior season for the Eagles. 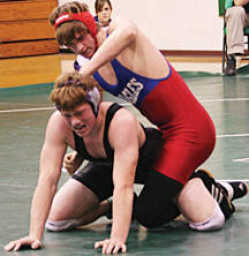 The Eagles seemed to fight an up and down day during the WCC action, but strong performances by their underclassmen.

It was a tough day to say the least for the Cougars of North Putnam. They had a wrestler place in the top four positions.

B.J. Brewer continued his impressive senior year by capturing the 152 title over Cascade's Justin Helmick. The win pushes Brewer's record to 21-2 on the season.

"B.J. did a great job. He's been steady all year; he's doing really well. Swartz did a good job for us," Kern said.

"The freshmen got a lot of experience. If we learn from this, then I'll be all right. We've had some good practices here lately and some good meets. I think we're slowly coming around.

We'll be all right. The sun will come up tomorrow no matter what we do."

With her title win on Saturday, Hughes became the first female wrestler to capture a WCC title. She came up just short last season, falling in the championship to Cascade's Ethan Guernesey.

"That the first time we've had a female wrestler win the conference and that was pretty exciting," Siddon said. "She just went out there and was ready to wrestle. She got really fired up about it and it's really good to see her do well.

"We wanted to see North Putnam's Tyler Ruble because that will make a difference in the sectional seeding, so we were hoping to see him," Siddon commented.

After receiving a forfeit in her first match, Hughes reached the title match by pinning Skyler Pintor; then dispatched Campbell in impressive fashion.