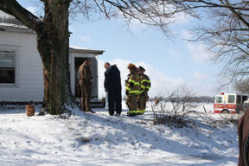 Firefighters and other emergency responders gather outside a home near Union Chapel following an apparent carbon monoxide accident that killed one and hospitalized others Wednesday morning.

One man is dead and several others were hospitalized as a result of apparent carbon monoxide poisoning at a home near Union Chapel Wednesday morning.

Putnam County Sheriff Mark Frisbie told the BannerGraphic that Deputy Danny Wallace responded to the house at around 8:30 a.m. to assist with the death investigation.

"It's just routine for us to do a death investigation in cases where someone is found dead," Frisbie said.

About a half hour after Deputy Wallace arrived at the home to meet with family members of Phipps, the sheriff says Wallace started feeling "woozy" and sick. Medics transported him to Putnam County Hospital where he remained for several hours for observation.

The sheriff and coroner offered conflicting numbers of others who were overcome by the apparent fumes from a furnace ventilation pipe.

Miller said there were a total of eight people transported to the hospital, including four of Phipps' family members, the sheriff's deputy and Operation Life employee Jessica Petticord. All were treated and were expected to make a full recovery.

The sheriff said he thought there were five people who suffered ill effects of the fumes, including his deputy.

Firefighters also responded to the scene to test for the level of fumes, which the human nose cannot sense. It is an odorless, colorless gas that can have fatal effects.

"The thing about CO is you can't smell it," Sheriff Frisbie said. "It just sneaks up on you."

Miller said it appeared Phipps had been deceased for about two hours prior to his family finding him.

"He had not died too long before he was found," he said.

The body was taken to Terre Haute Regional Hospital for an autopsy to confirm Miller's speculation that carbon monoxide killed Phipps.

He said the source of the fumes is believed to have been a vent pipe for a furnace. The pipe appeared to be in a decayed state, according to Miller, and fumes made their way from the crawlspace and into the home.

"CO detectors are always a good idea for everyone to have," Miller said. "The levels in there were extremely high."