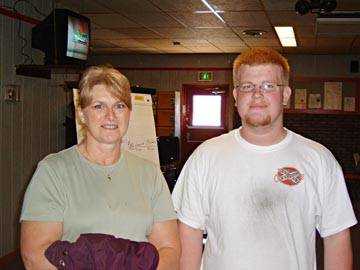 The bowlers partnered on the lanes by drawing number that matched the men with the women. The lowest team score bowled on each pair of lanes was eliminated after the first game. Three more teams were eliminated after a second round of games.

Jack Sowash and Samantha Robinson placed third, with the teams of Diana Waggoner and Michael Rumley did battle against Jane Bruner and Michael Friars for the outright championship.

The championship game was a nail-bitter, going down to the 10th frame where Rumley and Waggoner ended up winning by three pins.

"It was a fun tournament and everyone that bowled in it enjoyed the tournament; even if they were eliminated in the first or second round," Lucille Liebert said.