Cougars pound out 15-3 win over Clovers

CLAYTON -- It looked like the first game of the Cascade Sectional between North Putnam and Cloverdale was shaping up to be a tight one early. But 11 runs over two innings ensured the Cougars were moving on and capped a disappointing season for Cloverdale. 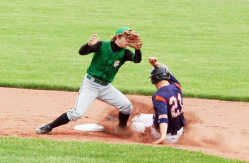 After scoring four runs in three innings, North Putnam scored four in the fourth and exploded for seven in the fifth. The Cougars had the usual suspects doing much of the damage at the plate on Monday.

North Putnam's three seniors came up huge in the first game of the sectional. J.T. Francies and Kyle Rooker connected on a triple and double, respectively, while David Church was a commanding presence on the mound.

After the contest, NP head coach Norm Fish commented that some might have thought that starting Church was a coy move, but Fish dismissed those ideas quickly.

"I had a lot of confidence in David," Fish said. "David Church has won five games for us this year, so I had all the confidence in the world in him. He did a nice job. He threw strikes and that's what we had to have today. Our offense provided for him."

Church had a strong outing and pitched a complete game, throwing for eight strikeouts and one walk on the day.

In the fourth inning, the Cougars got things rolling after a great at bat from C.J. Lofton. Lofton let balls slide by that were inches out of the strike zone and sent the ones that were in the zone into foul territory. After a lengthy at bat, Lofton wore down Cloverdale's Josh Flory to earn a trip to first base.

"C.J. did a great job," Fish acknowledged. "He had that at bat and got a walk. He hit the ball hard two more times. He's the kind of kid that makes contact. That was a great at bat -- that was huge. That got us started and then he followed that up with a nice hard line drive to the gap, so I'm really happy with the way he's playing."

Rooker and Dahlstrom provided some crushing hits in the fourth, smacking back-to-back doubles, but it was Kyle Alcorn who brought in two runs on a single. In addition to Rooker, Francies, Alcorn and Darr Boruff all scored in the inning.

But the Cougars were far from done.

Again it was Lofton getting things going for North, driving a hit into left field. After Darrick Wiatt reached on an error, Francies connected on his triple that scorched its way into left-center, bringing home Wiatt and Lofton. Alcorn reached on a walk and Rooker brought Francies home with a hard single to left field.

Just when the Clovers thought things couldn't get worse -- they did. 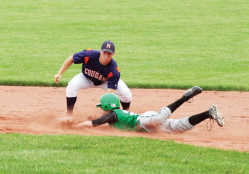 First baseman Tyler Watson came to the plate with two on and proceeded to lay down a bunt back to the pitcher. Alcorn scored easily while the throw was being made to first, but in a surprise move, Rooker rounded third and raced into home like a runaway freight train to put the Cougars up by 10 runs. Brock Jones and Lofton accounted for North Putnam's final two runs.

When asked about his team's bats coming alive in the fourth and fifth innings, Fish attributed it to a team attitude of getting together and getting the job done.

"That's baseball I guess. Just like any other team, once we get something going, everyone seems to jump on board," Fish commented.

Cloverdale came out early and showed they wouldn't be ending their season without making a little noise. After coming up empty in the first two innings and allowing the Cougars to score four runs, Cloverdale came alive in the third.

Bryce Tomlinson, Kyle Martin and Zak Osburn all scored for the Clovers in the third to close the gap to one as Chris Nees collected a double in the inning. But the Cougars were too much for the young Clovers to overcome.

Head coach Tim Savini acknowledged that the 2008 season has been a tough one, but he believes his team took valuable things away from their games. He thinks that if the team puts the time in during the off-season, it could really provide benefits for next season.

"We had a lot of learning experiences," Savini said. "I think today was, for two or three innings, a positive experience for these kids. I think they realize that North Putnam is a really good ball team and we played with them for three innings there.

"I think that's something real positive they can take into the summer and hopefully build on it," he added.

Despite finding themselves down throughout the season, the Clovers continued to fight game in and game out, something Savini attributes to their character.

"I think our kids have lot of character; they're all really good kids. They worked really hard all year at practice and they came out and played hard in the games. Sometimes you see them making physical errors, but mentally they're still trying. They're still out there trying to do all the things right. They've been great all year, they've worked hard all year; we just came up on the wrong end of some games," Savini concluded.

Next game -- North Putnam advances to face Covenant Christian at 5 p.m. Thursday at the #46 Cascade Sectional.