South runs away with sectional title

LIZTON -- Coming off of a 19-3 regular season, the South Putnam softball team had to know they were the favorites entering the Class 2A Tri-West Sectional. At the same time, they knew they would have to come to play to emerge the victors. 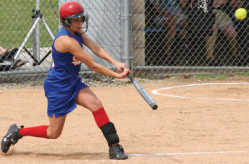 "We knew not to take any team lightly in the tournament because when you get to tournament time it's anybody's game," Eagle Coach Evonne Canary said. "There were a bunch of good teams, but we felt we were very competitive with each one."

But after a three-day delay, the Eagles took care of business, following up Thursday's 13-inning, 2-1 squeaker over North Putnam with a solid 12-2 win over Speedway in six innings Monday.

There was little doubt of the game's outcome from the first inning onward, as the Eagles (22-3) scored three runs in the first and continued to score, putting up runs in all but the fourth inning.

After Thursday's battle with North Putnam, a pair South's seniors talked about the relief of this game.

"(Today) was definitely a relief because I was so nervous that entire game," left fielder Samantha Stanifer said.

"It was an emotional game," first baseman Bailey Birt added.

"Yes, it was very emotional, so this felt good to have a little bit of a comfort lead," Stanifer continued.

Besides the relief of the lead, though, Coach Canary was simply happy her girls had some time off. After playing the equivalent of almost two games on Thursday, playing again on Friday evening could have been tough.

"Coming off of 13 innings, I know mentally, if nothing else, exhaustion would come from the intensity they kept up during those 13 innings. I think it was in our benefit to have it postponed until today," Canary said.

On Monday, the Eagle bats came to life, especially with runners on base. Meghan Canary got things started by driving in Krystal Welch with a double in the bottom of the first. Katelyn Sibbitt then drove in Canary on an error. Samantha Tomasino doubled in Sibbitt.

In the second, they continued the act. Oceaia Boetjer walked with the bases loaded to bring home Welch. Two batters later, Tomasino struck again, driving in Stanifer and Canary with her single.

The Sparkplugs cut into the lead with two runs in the top of the third, making it 7-2. The Eagles weren't done yet, though.

In the bottom of the third, Boetjer came up with the hit of the day, as she blasted a shot over the center field fence for a three-run homer, making the lead 10-2.

Tomasino and Boetjer combined for eight RBIs, helping their own cause in the pitcher's circle.

Tomasino allowed two runs on five hits and three walks in four innings of work. She had one strikeout in the win.

For the Sparkplugs, Lorian Tharp went the entire way, allowing 12 runs on 14 hits and four walks in five-and-two-thirds innings. She struck out four Eagles in the loss.

The Eagles closed out the Sparkplugs by adding one run in both the fifth and sixth. In the fifth, Canary hit a two-out triple, and Boetjer drove her in with a triple of her own.

Welch finished off Speedway by singling in Kaleigh Miller in the bottom of the sixth.

"The girls knew that we would have to come and play very tough defense and be aggressive at the bat, and they showed up and did that today," Canary said. "They have played hard all year. This has been one of their goals."

While the game certainly had its share of fantastic individual efforts, Coach Canary chose not to single anyone out. Her team had won a sectional.

"They all contributed. They've played balanced. Everybody's contributed all season -- if not offensively, at least on the defensive end," Canary said. "They've picked each other up. They're a talented bunch of girls."

For seniors Birt, Canary and Stanifer, this was their first trip to a sectional final. It did not show in their play, though. They led a poised group onto the field all year long.

"It's almost unreal because it's our senior year and we won sectionals," Stanifer said. "This is the first time we've played in a championship and we came out with a victory. I'm very excited. I can't wait for regionals."

"I'm just really proud of all the girls. We came here and we were focused every game. We were pumped. We had the talent, we knew we had the talent and we came and we played," Meghan Canary said. "That means a lot to us seniors since it's our last go-round."

With a sectional title in hand, the attention now turns to regional. The Eagles will visit Forest Park High School on Saturday, where they will take on South Spencer (18-10) in the first round of regional.

Asked what her team would need to do approaching the game, Coach Canary focused on the mental side of the game. The fundamentals should follow from that.

"Keeping the intensity, the girls staying up. Of course, defense is always going to be something that we focus on as well as being confident at the plate. I think they showed that today. If they can keep that, I'm confident we'll be competitive," Coach Canary said.

South Putnam takes on South Spencer at 11 a.m. Saturday in game one of the Forest Park Regional. In game two, Bloomfield (14-5) does battle with Brownstown Central (16-9) at 1 p.m. The championship game is set for 7 p.m.

Check out photos from the game at http://www.bannergraphic.com/gallery/spsoftchamps/