Indiana Youth Soccer recently announced the 2008 US Youth Soccer Olympic Development Program (ODP) Teams. Evan Smith of Greencastle will represent his age group as one of 18 boys named to this year's state roster. 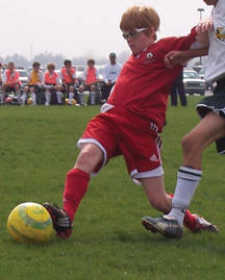 The team will attend the Region II soccer camp in Illinois this July along with teams from 12 other states. Also a 2007 ODP state team member, Smith plays for the Bloomington Cutters Soccer Club in the Indiana Soccer League and is a former player in the Putnam County Youth Soccer Association. He attends Greencastle Middle School.

ODP players represent the top players in Indiana Youth Soccer, and many will vie for positions on the US Youth Soccer Region II ODP roster. The US Youth Soccer Olympic Development Program (ODP) was formed in 1977 to identify a pool of players in each age group from which a National Team would be selected for international competition.

The US Youth Soccer ODP provides high-level training to benefit and enhance the development of players at all levels; and, through the use of carefully selected and licensed coaches, develops a mechanism for the exchange of ideas and curriculum to improve all levels of coaching.

Each State Association holds ODP try-outs on an annual basis, conducted by state association coaches who are recognized for their ability to identify and train players with superior skills. Players are evaluated on four major components that make up a soccer player: technique, tactics, fitness and a psychological component or attitude.