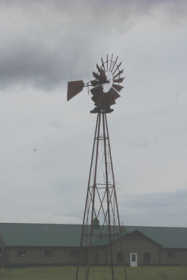 Windmills are still in use in northern Putnam County as evidenced by this one near Roachdale.

Windmills are unique machines designed to direct the wind's energy to perform work. They are engineering marvels that are both functional and gracefully attractive.

The American windmill was designed to be self-governing and require little attention other than lubrication. It was the windmill that helped to accelerate the development of the heartland and Great Plains. And, it appears that these machines are on the rise in Putnam County.

While some farmers look to earn additional income by harnessing the wind, many use the machines to generate energy on their own farms. The reason for installing a windmill is often to provide a backup power source or just as a desire to protect the environment.

A large whole-house windmill can produce 8,000 to 12,000 watts of electricity and has a blade diameter of 20 feet or more. Some designs begin producing electricity at a wind speed as low as 8 mph, but an average speed of 10 to 11 mph is typically needed to make it more economically feasible.

Windmills have been a part of the American landscape since the westward expansion, when the metal and wooden structures were used to pump water for farms and ranches. By the turn of the 20th century, farmers generated their own electricity with small wind systems. Those systems fell out of favor as grid power was extended to rural areas in the 1930s.

The modern era of wind energy began in 1978 with the adoption of federal laws allowing consumers to erect wind generators and sell excess power to electric utilities.

Yet, with increasing environmental concern and the limits of fossil fuel, wind power is gaining a renewed interest as a possible renewable energy source.

Windmills are popping up particularly on farms in northern Putnam County. And, they are being used to generate energy on a small scale.

According to information from the American Wind Association, there are typically two ways the electric utility company compensates users for excess electricity produces from a windmill. Under "net billing," your electric meter just runs in reverse. Another common method uses a second electric meter and the utility company pays you for the extra power.

In many cases, the payback period is long. Even if you install a large, whole-house-sized windmill, you should still keep your house attached to the utility company's wires (power grid). Sophisticated electronics inside the windmill controller match the electricity output to that of the utility company so they are compatible.

Another method of storing the wind's energy is to wire the windmill directly to a heating element in a large water heater tank. The electricity from the windmill keeps the water hot.

Today, the increases in energy prices and the expense of replacing electric pumps has led to an increase in the repair, restoration and installation of new windmills. But, those interested in using wind power should spend time researching information before throwing caution to the wind and installing a windmill.