The inaugural Indiana Prince and Princess Bowling Championship took place in Merrillville on June 15. The field consisted of the top 16 girls and the top 16 boys from associations across the state who qualified earlier this year.

Blake Doolin and Megan Friars led an impressive effort from the Greencastle contingent.

Out of the 32 finalists, 10 were from the Greater Greencastle USBC, who bowl at Alex Alleys in Greencastle. They came together on the 15 to bowl six games with the top five moving on to a stepladder format to decide the championship.

The first match of the stepladder format pitted Rumley against Cosner. Rumley got off to a slow start, and Cosner took advantage of it keeping the pressure on. Cosner whizzed by Rumley to win the match. 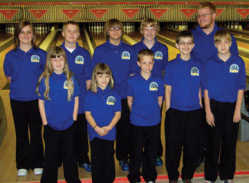 That paired up stepbrothers in the next match. Alex spotted Cosner a 58-pin handicap, and with the match under way Alex began his climb. Cosner and Alex were neck-and-neck until the end. Cosner rolled more than 40 pins over his average, but Alex slid by him to win by a sheer 2 pins.

That pushed Alex into another family battle with his cousin, Stone Hyten. Alex began this match spotting Hyten 48 pins. The battle was on - both cousins came out swinging. Hyten bowled an actual score of 158, some 50 pins over his average, but Alex proved too much shooting a 209 actual.

That set the final showdown: Blake Doolin vs. Reggie Alex. Both boys flew out of the gate striking and sparing, the match went back and forth several times.

The 10th frame was the deciding factor. Alex had a slim lead over Doolin, and shot first in the 10th. His first ball left two pins standing. On his spare attempt he chopped the six pin off the 10 pin to leave the frame open. He finished with a score of 180.

This still left pressure on Doolin who had to spare and get a nine count to win the match. Doolin also knocked eight pins down on his first ball, but then confidently converted the spare. Doolin stepped up for the last ball, and the crowd fell silent. He released the ball, and it headed for the pins. The ball came in a tad heavy, but with a good kick knocked all the pins down.

Tyler Nield and Austin Alspaugh, though not in the top five, also finished within the top ten. They both earned $25 scholarships.

The boys were not the only ones to do an outstanding job. The association had three girls, Brittany Friars, Britany Doolin and Megan Friars, competing for the Princess championship. Megan Friars finished as the top seed after the qualifying games; therefore, she had to sit, wait, and watch three stepladder matches bowled before she got her chance on the lanes for the final match. Megan is nine years old and ended up bowling against a high school age bowler.