A number of local baseball players have spent this summer playing for a team called Em's Dirtbags in the Indianapolis RBI League. Two Dirtbags and South Putnam players, Grant Zimmerman and Brayden Freeman, were selected as Indianapolis RBI All Stars. 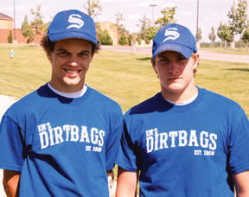 They compete in the 16- to 19-year-old division of the Indianapolis RBI League. RBI stands for Reviving Baseball in Inner Cities. 2008 marks the 20th season of RBI baseball. It has grown from a local program in South Central Los Angeles to an international campaign in more than 200 cities. The program has as many as 120,000 male and female participants each year.

The league holds tryouts for a senior and junior all-star team, and any player in the league can try out. Zimmerman and Freeman will play with the Indianapolis RBI All-Stars team in a regional tournament July 11-14 in Pittsburgh. The regional championship will be played at PNC Park, home of the Pittsburgh Pirates.

Should they win, they will play in the RBI World Series in Los Angeles the first week of August. The championship game takes place at Dodger Stadium.

"The three of us are very excited to be representing Indianapolis, Em's Dirtbags and South Putnam High School as we head for the regional in Pittsburgh and hopefully the World Series in L.A.," Campbell said.

Zimmerman and Freeman aren't the only Putnam County connections to Em's Dirtbags and the Indianapolis RBI League, though. The full name of the team is Em's Dirtbags of Putnam County and South Putnam's varsity baseball staff also coaches this team. Coach Emmitt Carney, for whom the team is named, is joined by Campbell and Coach Chris Jones.

Em's Dirtbags are not affiliated with the school, though. While much of the roster is composed of Eagle players, there is also one player from Cloverdale and one player from Cascade on the team.

The Indianapolis RBI League recently expanded and opened its doors to teams from outside the city. There are 22 teams competing in the league in 2008.

The name "dirtbag" is often misunderstood outside of baseball circles. Far from a derogatory term, it is used more to describe a scrappy style of play.

Dirtbags is the unofficial nickname of the Long Beach State 49ers that describes the program's style of play and success against higher profile programs. The term first came to be in 1989, when the 49ers were almost all new players and were playing without a home field. Even worse, they were practicing on an all-dirt pony field.

The infield coach would take the infielders to the all dirt field for their workout. When they returned, they were almost entirely covered in dirt.

This was the genesis of the name "Dirtbags."

From that humble start, the 1989 team won its first 18 games and advanced to Long Beach State's first College World Series.

Many former Long Beach State Dirtbags have gone on to success as professionals. They all seem to wear their old nickname with pride.

"Being a Dirtbag means giving 100 percent in every thing you do, going all our on every play and always putting the team before yourself," said former Long Beach and current Oakland A's shortstop Bobby Crosby.

As for the first half of the team's nickname, it is simply a nod to Coach Emmitt Carney and indicates they play this way for the coach.

Coach Carney has a long history as a baseball coach, scout and player. He played baseball for Kentucky Wesleyan College and was the team's best pitcher in 1979. Coach Carney is also currently an associate scout for the Atlanta Braves.

He is also a founder and coach for the Indiana Bulls. The organization has had 89 players drafted into professional players and more than 230 college players as of 2006. Carney has coached players such as Scott Rolen, Clint Barmes an A.J. Zapp.

In the past few years, some of Coach Carney's former players have begun referring to themselves as Em's Dirtbags to indicate how they play for the coach. The local team has simply adopted the nickname in a more official sense.

"Trust me when I say that Em's Dirtbags is a baseball team that Putnam County can be proud of," Campbell said.