Phillips sworn in as DPW director 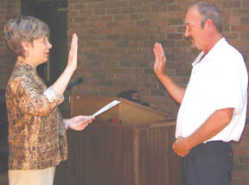 A nearly 20-year veteran of the department is the new superintendent of public works for the city of Greencastle.

Brad Phillips, who stepped into the position on June 20, was officially sworn in on Tuesday.

Phillips began working for the city in 1989. He has been the assistant superintendent of public works for nine years.

"I love the job," Phillips said. "I love working outside and working with people. I like correcting problems … I enjoy fixing things."

Phillips has lived in Greencastle all his life. He graduated from Greencastle High School in 1979. He and his wife have two sons, Caleb, 12, and Cody, 7.

"They support me and it really means a lot to me," Phillips said.

Phillips also has the support of his city co-workers.

"(Phillips) not only knows our roads, streets and citizens well, but is certified to operate all equipment in the department and has a good working relationship with the staff, as was evidenced when three (staff members) finished an assigned project early so they could stop at city hall on their way back to the department to witness his swearing-in ceremony," said Greencastle Mayor Sue Murray. "Brad stepped into the role as interim superintendent when Paul Wilson resigned from the position in June. I am delighted that Brad has decided to take on the responsibility permanently."