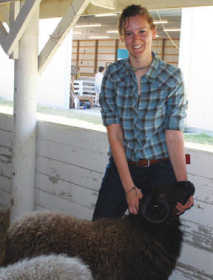 It's just another day at the Putnam County fair for one 10-year 4-H participant.

Sarah Myers brought five Shetland sheep to be judged at this year's sheep show Wednesday morning. So many, she had to employ volunteers to help her show since often times she had at least two going at the same time.

"I was the first person to show Shetlands in Putnam County," Myers said. "I have been showing them now for eight years."

Eight years, and now the Shetland category was one of the largest with around 10 people showing. But it has not always been easy sailing for these small statured sheep.

"People used to say they weren't real sheep and shouldn't be allowed because they are so small," Myers said.

Myers ended up receiving Reserve Champion for her ram "Zeus" and ewe "Mallie."

According to the Oklahoma State University's Web site (http://www.ansi.okstate.edu), "The Shetland's roots go back over a thousand years, probably to sheep brought to the Shetland Islands by viking settlers. They belong to the Northern European short-tailed group which also contains the Finnsheep, Norwegian Spaelsau, Icelandics, Romanovs and others.

The Shetland is the smallest of the British breeds and it retains many of the characteristics of wild sheep.

Today they are considered a primitive or "unimproved" breed.

Rams usually weigh 90 to 125 pounds and ewes about 75 to 100 pounds. Rams usually have spiral horns, whereas the ewes are typically polled. They are fine-boned and their naturally short, fluke-shaped tails do not require docking.