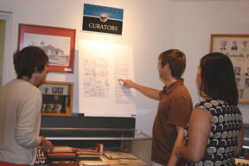 If you went to school somewhere in Putnam County prior to the 1950's or love history, you may want to check out a great exhibit at Putnam County Museum.

The Reelsville High School Alumni put together an exhibit detailing the history and location of 15 early schools in Washington Township (Putnam County) that is available for viewing at the Putnam County Museum.

Included in the exhibit are memorabilia from Reelsville High School including yearbooks, senior cords, letter sweaters, trophies and the softball championship banner from 1951-52. Plenty of photos as well as a map and short history of early schools is also in the exhibit.

Short histories describing the architecture of the buildings, renovations, closings and the number of students are all part of the histories.

Many of the schools were originally built prior to the 1900's. Most were one and two room log structures that were replaced later by more modern buildings. Some schools closed because of low student population (3 students) and some due to consolidation.

The Manhattan School is described as a log building built prior to 1864. The second school, a tall two-story building with two rooms was erected in 1881. That building was discontinued in 1920 when a new structure was built and discontinued in 1954 when the Reelsville School was completed.

Another school called Riley Allen was a log structure built prior to 1864 and called "Blackhawk School" because of its location. It too had a small enrollment at one point and was closed in 1931 when students were transported to Beech Grove School and later to Manhattan by "motorized hack."

Other facts about three and four year high schools as well as the county's first commencement can also be found in the histories. A map showing the location of all the schools is also available.

The information about the old schools came from "Schools in Your Hands" published by the Putnam County Retired Teachers Association.