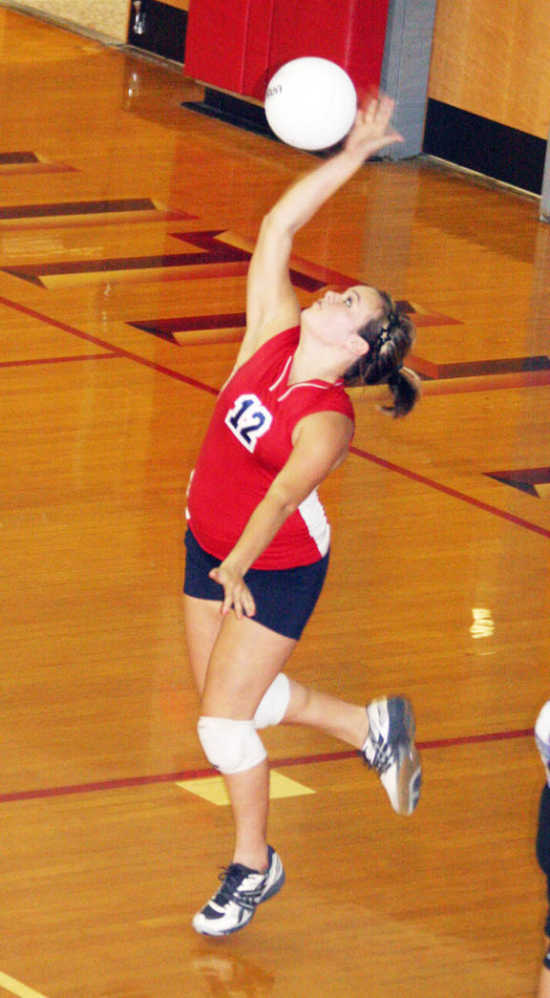 Kaleigh Miller puts up a serve Thursday evening. The senior led the Eagles in points, aces and assists.

The Clay City volleyball team defeated South Putnam in three games Thursday night, but the match really seemed to be decided in the first game.

In game one, it was all Eels, as they got out to a 10-4 lead and did not let up. While Clay City (2-0) was getting long service runs, the Eagles, by comparison, struggled with mental errors and communication problems early.

After South Putnam (0-1) had pulled within four at 11-7, Clay City's Laykyla Cook ran off seven straight points to give the her team an 18-7 lead.

They ultimately closed out South Putnam 25-10.

"I think the keys were definitely our serving and communication," Eel coach Ashley McCullough said. "I thought our communication was outstanding compared to the other night against Union. That was one of our downfalls. Just the overall transition, getting up for the attack, being there fore tips."

In game two, South Putnam seemed to have recovered. They took their first lead of the match at 5-4 in the second game.

They held that lead most of the way, but after taking a 22-17 lead, everything fell apart.

For Eagle coach Jill Newton, the problem at the end of game two was the same problem her team had all night -- they played not to lose.

In game three, things were more like game one again. Clay City took control early and rode it the rest of the way. A net serve from the Eagles closed out the game and match at 25-18.

For the Eagles, Kaleigh Miller was the main bright spot, leading the team with six points, two aces and eight assists. The point was not lost on her coach.

For the Eels, it's now on to Cloverdale on Tuesday. With her team sitting at 2-0, Coach McCullough wants to see more of the same.

"We want to keep the momentum on our side and keep the communication like it was tonight," she said.

The Eagles host the Eagle Invitational at 9 a.m. Saturday. Newton certainly has some improvements she'd like to see made.

"We're going to be working on serve-receive, serving and a little bit better communication. If we can correct those things and stay consistent, instead of just playing a couple good plays aggressively and falling back into safe mode, we'll be okay," she concluded.