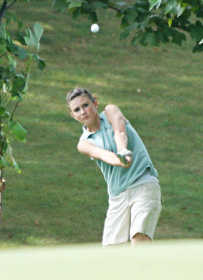 Cloverdale's Elizabeth Wiley fires a chip onto the No. 3 green at Clover Meadows in Monday's contest with Owen Valley.

CLOVERDALE -- It seems the Cloverdale girls' golf team had a severe case of the Mondays. The Clover squad struggled on the course and fell to Owen Valley 251-215.

"Not a good day for the Clovers. We've been trying to post a better team score," CHS head coach Ken Williams said.

Things got off to a rough start for the Clovers as Kayla Langdon began the day with a less than perfect tee shot and continued to struggle for most of the day. She wrestled with poor tee shots throughout her round, but was able to get strokes back with good play around the greens.

Langdon was able to get control of her game as the round came to an end. She blasted a long drive on No. 9 and followed that up with two good iron shots. After all the tribulations of the day, she finished with a 48, a score even her coach was impressed by.

"On the positive side, was Kayla rebounded. Actually I don't know how she got a 48 with some of the shots she hit," Williams commented. "That was a miraculous recovery of some sort out there. I know she had some good holes out there. Overall, she didn't strike the ball very well today. She had a little quirk in her swing of some sort that kept resurfacing over and over."

Cloverdale's No. 2 golfer Elizabeth Wiley also struggled on the day and finished the day with a 61. Wiley almost holed out a chip on No. 4 and drove the green on No. 7 and drove the ball well during the round.

Victoria Boyette with a 65 and Erica Looper who shot a 77 rounded out Cloverdale's scoring.

Boyette and Looper are in their first year with the squad and Wiley is in her second, a fact that Williams believes played into the results of Monday's match.

"Well, none of them are terribly experienced," Williams acknowledged. "We've got one with one year and the other two are first year players, but they didn't handle the mental aspect of playing poorly. They can't put that shot behind them and move on to the next one."

Williams also admitted after the round he tried to work it out to where his Clovers could give the Patriots a run for their money, but to no avail.

"I was trying to do some tricky math and figure out a way where we could beat Owen Valley tonight, but we didn't come close," Williams said. "Everybody pretty much had a weak day on the course. We had some very poor shots out there."

The Clovers will take on Monrovia and Plainfield at Deer Creek at 4 p.m. today.

Next match -- The Clovers will take on Monrovia and Plainfield at Deer Creek at 4 p.m. today.