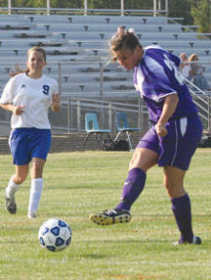 CRAWFORDSVILLE -- The Greencastle girls' soccer team has come a long way in just under a week's time.

In last Tuesday's season-opening 7-3 loss to Tri-West Coach Maurice McKee was unhappy with his team's passing and their mode of attack. Additionally, all three of their goals came from one source -- senior Hannah Spencer.

On Monday evening, the Tiger Cubs (2-1, 1-0 WCC) had a solid passing game, attacked up the middle and got goals from four different players, as they defeated Crawfordsville 5-1.

"Compared to last week's game, we're playing 100-percent better," McKee said. "We have done a lot of practicing on playing to feet instead of air balling, and down the right side and crosses. It's just a matter of practicing and showing them what needs to happen. They all knew it; it's just a refresher. We've got another way to play this game, and this is the way it should be played."

In the early going, the two squads looked to be evenly matched. Neither team could get a lot of momentum and play bounced back and forth between the two halves of the field.

With under 29 minutes on the clock, though, the Cub attack got through the Athenian defense. Hannah Serlin found Whitney Brotherton for the game's opening goal at the 28:32 mark..

The game continued to be played pretty evenly, though, and the Athenians broke through with an Alex Gasaway goal at the 8:01 mark.

The shot was directly at Tiger Cub keeper Jennifer Grumme, but she mishandled the ball at it slipped past to tie the game at 1-1.

For the remainder of the half, Crawfordsville was mostly on the attack, but they were unable to get another score.

With the score tied at the half, McKee and assistant Alison Dobbs talked to the team about some needed adjustments.

"We talked to them at halftime about playing the ball to the feet, keep it on the ground, work the ball around and work it in. In the first half, we were doing a little too much air ball and weren't getting it quite to our people," McKee said. "Once the girls started playing and making runs, it turned the ballgame all the way around. It makes for a good game."

The Cubs took the message to heart and laid it on thick in the second frame.

With 38:14 showing on the clock, Hannah Deer took a pass from Spencer and put into the lower right corner of the goal.

The Cubs didn't stop there, though. They stayed on the attack for most of the second half. Grumme did not see her first shot on goal of the half until there were under 17 minutes remaining.

At 27:30, GHS struck again as Brotherton took another Spencer pass and put it past Crawfordsville goalie Kaitlyn Carey.

Continuing on the attack, Melissa Ball passed to Katie Farris, who sent the ball arching over Carey's head and into the back of the net.

The goal gave Greencastle a 4-1 advantage.

After Crawfordsville finally got a scoring chance of its own, Greencastle came right back, as Serlin took a Spencer pass and scored to bring the game to its final score with 15:46 left.

Spencer's role of dishing out assists has been another nice development for the Cub attack. She draws so much attention from the opposing defense that the team benefits with open teammates.

"In practice we suggested that Hannah not try to do all the scoring. She gets a bunch of those A's beside her name for assists. She said a while ago that she had three assists tonight and it normally takes her most of the year to get three assists," McKee said.

But more than the statistics, McKee is happy to see his senior taking the lead in doing whatever she can to help the team win. In the past, she's done the scoring and the Tiger Cubs have won. On Monday, she helped her teammates score and the team won.

"She's stepped up, taken the ball and started making the assists," McKee said. "It worked very well because she's playing the center most all of the time, anyway. That way if we get in a situation like we had last week where they're double teaming her, she's out of the play but she's a good assist person. We need to utilize her however we can. She did very well tonight at positioning the ball and handling the ball and shooting the ball when she needed to. I'm real pleased."