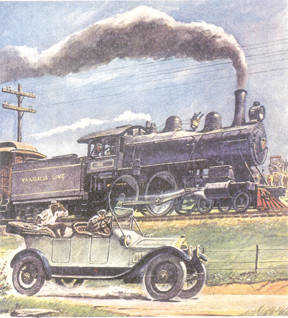 Artist Herb Matt captured Harry McGee's1916 race against the Vandalia Flyer, a Pennsylvania Railroad train, in his painting which appeared on the cover of the March 1950 issue of Railroad magazine.

Harry McGee will never be confused with Dale Earnhardt or A.J. Foyt. After all, he drove to only one victory his entire life.

But when McGee raced across Putnam and Clay counties 92 years ago Friday -- on the hot afternoon of Aug. 29, 1916 -- he drove into immortality.

It all began as a publicity stunt.

McGee was an upstart automobile salesman at the Steinhardt-Grieger Cadillac agency in Indianapolis at a time when cars were still a novelty and roads were little more than dirt wagon paths. Searching for a way to excite the public's interest in automobiles, and figuring he had nothing to lose, McGee boasted publicly that he could beat a Pennsylvania Railroad passenger train in a race from Indianapolis to Terre Haute.

Railroad officials ignored McGee at first, but finally gave in to public clamor for the race. The possibility that the train might lose never crossed their minds.

The race was advertised for weeks.

McGee would drive a new eight-cylinder Cadillac with Sylvester Griffith, a chauffeur at the Cadillac garage, riding in the back. McGee figured he would need Griffith's weight to help keep the car on the road at high speeds.

Veteran engineer Pat Daily would be at the throttle of the Vandalia Flyer, fastest locomotive on the Pennsylvania line, assisted by fireman Oriville Kitch.

The rules were simple. McGee would head west on the dusty, rutted, unpaved Old National Road, an early stagecoach route that was the father of U.S. 40, grandfather of Interstate 70. Members of the Rotary Club would be stationed at strategic points to signal McGee with white flags that the road ahead was free of meandering livestock.

Daily would be required to make scheduled passenger stops at Plainfield, Greencastle and Brazil on the way to Terre Haute. All agreed that was fair; while McGee was picking his way through ruts and chuckholes, the train would have the benefit of smooth rails.

The Pennsylvania Railroad never gave a thought to losing. If McGee was worried, he didn't show it.

Precisely at noon, Bell fired a gun into the air, hundreds cheered and the race was on. McGee gunned the Cadillac, nearly tossing Griffith out of the back seat. Daily blew the locomotive's whistle, waved to the crowd and headed out.

The road and the railroad tracks forked apart as the contestants left the west side of the city and the train took a commanding early lead as it prepared to stop at nearby Plainfield. Once clear of the city McGee began to make up time, swerving and fishtailing along the dirt route. Roadside crowds, many of them picnickers on hillsides, waved their encouragement as he sped by at the head of a huge dust cloud.

McGee continued west, successfully negotiating the infamous "Reelsville Hill," a steep downward grade through a bridge over Big Walnut Creek. The original road then ran along the north side of the creek.

Meanwhile, Daily had completed his stop in Greencastle.

In Clay County the Old National Road and the railroad tracks ran closely parallel in places.

The road was the main street of Brazil, where McGee blazed through to the cheers of a huge throng which then ran to the train station.

Minutes later, Daily blew the Vandalia Flyer's whistle as he saw the crowd waving at the station ahead. But as the slowed to a stop, the engineer could not believe what he was hearing. "You're too late!" came cries from the crowd. "He already went through!"

Daily was stunned. He ordered passengers boarded immediately for the final 20-mile dash to Terre Haute.

But the crowd had been right. It was too late.

When the Vandalia Flyer screeched to a halt at the station in Terre Haute, there was McGee, standing with one foot on the front bumper of the Cadillac.

He was covered with dust, except for the imprint of goggles around his eyes. Mayor Gossom was standing next to him, holding the note from Mayor Bell.

Daily leaned out of the hissing locomotive in absolute astonishment. "Oh, Orville!" he exclaimed. "Here's that car as sure as we're alive!"

Gracious in defeat, Daily climbed down and shook McGee's hand. The car had covered 72 miles in 77 minutes.

Newspapers across Indiana carried the news of McGee's victory, but there's no record of whether he sold any more Cadillacs because of it. Daily remained at the throttle of the Vandalia Flyer for years, although some old-timers swore that he never got over the heart-breaking loss.

Few remember Harry McGee. But on that hot August afternoon he signaled the change in public transportation that was to come and raced forever into local lore.

Larry Gibbs, a native of Putnam County, is a former general manager/editor of the Banner Graphic. A newspaper editor for more than 25 years he now is public relations director for Mansfield City Schools in Mansfield, Ohio. He can be contacted at lgibbs@mansfield.k12.oh.us.