ROACHDALE -- Small-town soccer matches don't tend to be the loudest affairs around. Add to that a team that hasn't won all season, and one might expect near silence. 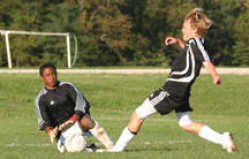 North Putnam keeper C.J. Lofton covers a shot on goal during the Cougars' contest with Speedway Tuesday. In just his third game in the net, Lofton made 19 saves on the night for the Cougars.

"You guys are looking good," said one parent. "We got some momentum," added another.

"That's the most chance we've had all year by far," one smiling mother said afterward.

The season has been frustrating, of course, but the North Putnam fans continue to support their team. The attitude doesn't go unnoticed by the Cougars or coach Dave Moller.

"It's encouraging to have fans always supporting you," Moller said. "It's nice to see all the fans out there and the positive support and encouragement they give the guys."

Early in Tuesday's match, junior goalkeeper C.J. Lofton kept the Cougars in the match for a while. In the first 20 minutes, Speedway was in control of the ball the vast majority of the time. However, Lofton stopped 10 of the first 11 shots he faced.

The effort is all the more impressive in that Lofton didn't become a keeper until last week.

"He made a lot of great saves that first half and kept a lot of goals out," Moller said. "For it being only his third game, he's picked up on it pretty quick. Obviously there's still a few things he needs to work on, but he's doing well."

Shortly thereafter, though, the Cougars suffered a huge mental lapse. Between the 17:27 and 9:40 marks in the first half, the Sparkplugs laid it on with six goals.

While Moller saw some good stretches of play, his team also went to sleep at times, especially late in the first half.

"We have improved. This is the most attempts we've had on goal. We just have moments when we play really well and we have mental lapses. We let in six goals in eight minutes in the first half," Moller said.

Late in the half, the Cougars looked like they would finally break through with a goal, staring at open goals twice in the final minute. However, both shots went wide left.

The Sparkplugs led 7-0 at the half.

In the second, it got better for the Cougars in terms of ball control. Much of the half was played in Speedway's end of the field. The problem was, the Cougars continued to not convert on opportunities and the Plugs converted almost every opportunity.

Speedway once again shut out the Cougars in the second, outscoring them 5-0.

The Cougars saw some solid play up front from Cody Summerlot, Keegan Foltz and Tyler Ruble. The many opportunities came up empty.

It was in the second half, with the Cougars tantalizingly close to a goal, that the fans were at their most supportive.

Moller hopes to take that energy into Thursday's match with West Vigo. He can see his own team getting better and North has done well against the Vikings in the past.

"Thursday we have a match against West Vigo. Usually that game's pretty close. I'm looking forward to that," Moller said.

Besides that, the coach wants to see his team finally get their first goal and play a solid game, all the way through.