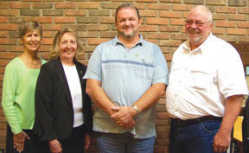 Greencastle city employees Barbara Hathaway and Ed Phillips were recently honored by the state for their many years of service to the city. Pictured from left are Greencastle Mayor Sue Murray, Hathaway, Phillips and Greencastle Utilities Superintendent George Russell, who nominated Hathaway and Phillips for the awards.

The Indiana Department of Environmental Management recently honored two Greencastle city employees for their many years of service.

Ed Phillips, assistant superintendent of utilities, and Barbara Hathaway, senior clerk in the Greencastle Water Utility business office, were each presented with a John N. Hurty Award at the annual American Water Works Association meeting for the Central District, which was held earlier this month in Danville.

Hurty awards are presented to individuals who have been employed for 25 years or more in some area of waterworks production or distribution in Indiana.

City of Greencastle Utilities Superintendent George Russell nominated Phillips and Hathaway for the awards. They began working for the city within a week of each other -- Phillips on Nov. 14, 1977 and Hathaway on Nov. 21, 1977.

"Barb and Ed have dedicated over 60 years between them to the Greencastle Water Works Department and they city of Greencastle," Russell said. "They are very deserving of this recognition."

"What's overwhelming to me is that we have employees who have been with the city for 30 years," she said. "They've been through the building of new plants and they've been here as technology has evolved. They've weathered all these storms, and they've continued to be great employees who are dedicated to the city. In this day and age, I think that's incredible."

The reason Phillips has been with the city for three decades is simple.

"I love the job," he said. "(Getting the award) feels pretty good. I'd like to get a couple more."

The John N. Hurty Award is named for John Newell Hurty, M.D., who was the state health commissioner of the Indiana State Board of Health for seven terms from 1896 to 1922. A pioneer dedicated to fighting water-borne diseases, Hurty was instrumental in the formation of an organization of community water systems operators now known as the American Water Works Association.