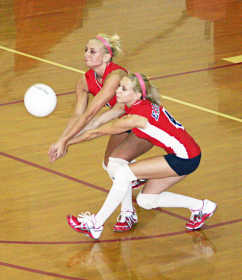 South Putnam's Oceaia Boetjer (left) and Rachel Egold both go after the ball during Monday's contest with Monrovia. The Eagles dropped the contest in four games.

Despite not seeing the results in the win column, the South Putnam volleyball team continues to improve and their head coach hopes their building momentum for a push at the end of the season.

The Eagles fell to visiting Monrovia in four games 27-25, 25-6, 18-25 and 26-24 and showed that they were able to compete with a quicker, more powerful team. Even though the improvement is there, the season is still frustrating for the Eagles.

"I told the girls it's frustrating because I really don't feel like we've played a team this year that we couldn't have beat," Eagles head coach Jill Newton said. "At the same time, I'm proud of the way they're playing because I have seen improvement. Outside of game two, our serve-receive was really good tonight and I thought overall, we played together as a team. Communication for the most part was more consistent than it's been.

"I'm proud of things and I've seen improvement, now we just need to put it all together," she added.

The first game belonged to the Eagles from the get go. They roared out to an 8-1 lead and looked as if they would make short work of the Bulldogs. South Putnam extended their lead to 19-10, but the Bulldogs showed they had some fight left.

Monrovia began to chip away at the lead, but South found themselves one point away from a win at 24-19. The Bulldogs came on strong at the end and the Eagles watched as their chances to take game when Monrovia took their first lead of the game at 26-25, then won the game's next point.

After losing their edge in the first game, South Putnam hit the court flat in the second game and quickly fell to the Bulldogs 25-6. As the game wore on, South Putnam's side of the net grew quiet and the lack of communication only exacerbated their situation.

It was difficult to know what to expect when the Eagles took the court for game three. Would they show the consistent play that almost garnered them a game one win or would they continue their silence and go out with much of a fight? The Eagles chose the former.

The Eagles stormed the court with new energy and quickly jumped on Monrovia. After building a nice lead, they maintained it and capitalized on some nice net play and good serving.

Oceaia Boetjer came to the service line with the score 18-11, then proceeded to serve four straight aces and have South on the brink of their first win on the evening. The Eagles closed out the game when Ashley Wombles recorded a stuff block giving the Eagles a 25-18 win.

South Putnam hoped to take game four and go to a decisive fifth game, but the powerful Bulldogs were too much for the Eagles.

The Eagles held strong and made Monrovia work for every point they earned. Brooke Boetjer tied the game 24-all after recording two consecutive kills, but Monrovia's Jessica Standeford found the line on a kill and ended the contest with a block at the net.

Confidence is an important factor to any team, but when you're as young as the Eagles -- it is essential. Newton believes that if her squad can get some wins, they will be able to do some damage as the post-season approaches.

"I sometimes forget that I do have two freshmen that play for me, and a sophomore without a lot of experience and so sometimes I think my expectation for them is high, which I want them to be, then I have to remind myself that they're still gaining their varsity experience," Newton said. "This is their first year where they're really getting it. I think Ashley Wombles does a good job, I think Brooke Boetjer does a good job and I think Emily Dabkowski does a good job. Sometimes I lose sight of that fact that when there are things I think they should be doing, then I think that's an inexperienced play and hopefully they'll continue to build on that and by sectional time we'll be ready to go."

The South Putnam junior varsity defeated Monrovia in three games to get the win.

Next match -- South Putnam will host Danville at 6 p.m. Thursday.