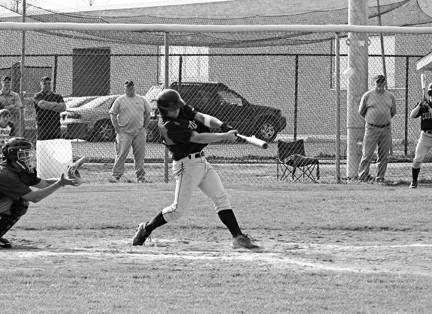 After a season that saw him lead the county in nearly every major offensive category, North Putnam senior shortstop Kyle Rooker was an obvious choice for the 2008 Putnam County Baseball Player of the Year.

The senior was also a key relief pitcher for the Cougars, as he was 1-1 with two saves on the season. In eight appearances, he allowed a 4.20 ERA while striking out eight batters.

Rooker is joined by four teammates on the All-County team in fellow seniors Jordan Berry and J.T. Francies, and junior Griffen Dahlstrom.

In his senior year, Berry made a big switch from the Cougars' primary catcher to their No. 1 starting pitcher. The results were outstanding, as Berry allowed just a 2.18 ERA on his way to an 11-1 record. He struck out 92 batters in 61 innings pitched.

Francies anchored the Cougar outfield from center and also anchored the lineup from the leadoff position. He batted .343, picking up 36 hits, seven doubles, three triples and a homer. The senior also scored 35 runs while driving in 16.

Dahlstrom spent his junior season splitting time between pitcher, catcher and several infield positions. At the plate, he batted .518 with 43 hits, 20 doubles and six home runs. He also drove in 35 runs while scoring 35 of his own. He was third on the team with 16 steals.

In his senior season, second baseman Hammond batted .366 with five doubles and three home runs. He scored 29 runs while driving in 17.

From the leadoff position, Chestnut led the Eagles with a .457 average, 43 hits and 10 doubles. The sophomore also collected 36 runs scored and 28 RBIs.

Representing Greencastle on the team are junior Kyle Nobles and seniors Kendall Faust and Jeremy Hayden.