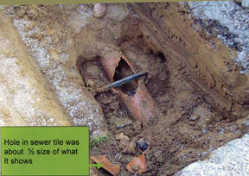 A large hole in a sewer pipe allowed water from a water pipe to flow into the system undetected.

Who knew the answer to the city's water problem could be so simple? And the funny thing is, it came by way of a clogged toilet.

For weeks, water plant officials have struggled to figure out where as much as 25 percent of the city's water was going each month -- a 20-percent loss on the year.

Meters throughout the city were checked. The water plant was given a good once-over and officials racked their brains for a good while trying to come up with a solution. 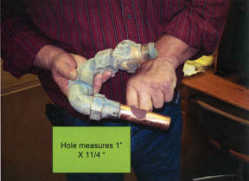 Picture shows section of copper piping with hole that officials believe was the source of a major water leak for Greencastle, accounting for a daily water loss of 340,000 gallons

But a solution came this week when a utility worker, responding to a homeowner's report of a backed-up toilet, found the answer to the city's water troubles in the front yard.

Utilities Superintendent George Russell told delighted members of the Greencastle Board of Public Works Wednesday that the worker was walking down the sidewalk in front of the home and felt a vibration under his feet.

After digging up the area, he was surprised to find a ruptured water line. But the story doesn't end there.

Russell said the worker discovered that water from the broken pipe was flowing directly into a hole in another pipe -- this one: a city sewer pipe. This meant that water from the water pipe was directly entering the sewage system, rather than rising up to the surface of the ground where it could have easily been detected.

"This could easily account for at least 50 percent of the water loss," Russell told the board. "Who knows how long this has been going on?"

"It's pretty amazing, really. It's just luck that we found it," Russell said with a chuckle.

The leaky pipe has since been repaired and Russell anticipates the water plant will quickly begin to notice a decrease in the amount of lost water.

A 10-percent loss is considered acceptable in most cities, Russell said.

Meanwhile, Russell plans to continue looking at ways to minimize water loss for the city, including, as he said last month, checking and replacing meters that may lack accuracy.

"But this is definitely a step in the right direction," he said.