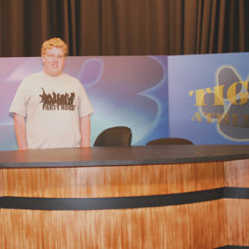 Once a week, a new 30-minute news segment airs on DePauw University's D3TV station, followed by a 15-minute sports spot.

Those spots -- dubbed "The Source" and "We've Got Beef" -- are shown live once and then loop on the campus station and local cable access throughout the week. They may not even be an hour long combined, but the students who work on them put many hours into their production.

The students on the D3TV staff work there on their own time -- the pursuit is strictly extracurricular.

"My duties here are really more about the maintenance of the facility," he said.

Senior Andy Reed is the station's news director. He tackles this position while carrying a full course load for his communications major and computer science minor.

"I'd love to be able to do a show daily," Reed said. "But I never realized how much work went into that one show."

Reed is unsure of exactly how many students work at the station, but estimates the number to be in the 30s.

"We have six anchors and a couple of reporters," Reed said. "They shoot, write and edit the stories, and it's my job to make sure we get on the air."

One of the anchors is senior Eric DeFreeuw, 22, a communications major.

"I'd like to go into reporting or news anchoring, and ultimately sportscasting of some kind," he said.

DeFreeuw has worked at the station since the second semester of his freshman year.

Tuesdays are spent preparing a script and doing a rundown of the show.

On Wednesdays, the station's reporters meet at 4 p.m. to firm up stories. The anchors arrive at the station about 6 p.m., and the show goes live at 7:30 p.m.

"During the week the pace seems really slow," DeFreeuw said. "But on the actual night of the show, it's really crazy and fast-paced. Something always goes wrong … the teleprompter doesn't work, some guy's mic stopped working. It's a ridiculous pace. There are people running all over the place."

Content for "The Source" is comprised largely of events at DePauw, but Reed said he and his staff are trying to branch out a bit.

"It's very easy to cover a lot of DePauw news because we're here," he said. "I'm trying to get people out to cover more of what's going on in Greencastle, and also to concentrate on the crime beat. I'm really pushing for more local news. We're working on developing sources."

Although DeFreeuw wants to go into sports broadcasting, the bulk of his reporting at D3TV has been news.

"I've really gotten into the crime beat," he said. "At first I didn't like it much, but I had an internship in Fort Wayne over the summer and got to cover some interesting things."

A bit of sports news is included in "The Source," but "We've Got Beef" covers local events from a different angle.

"It's more analytical," Reed said. "It's all talk, and it's not scripted."

New installments of "The Source" air on D3TV Wednesdays at 7:30 p.m., followed by "We've Got Beef" at 8 p.m. The spots also air on local cable access Channel 2, which is offered by Comcast.

Inquiries about the station or programming can be e-mailed to d3tvnews@depauw.edu.