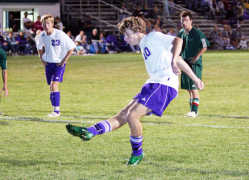 GHS senior Greg Lilly blasts a penalty kick into the net in the first half of Greencastle's win Thursday night. The Tiger Cubs will face Martinsville at 10 a.m. Saturday for the sectional title.

MOORESVILLE -- Despite squandering early scoring opportunities, the Greencastle boys' soccer team made easy work of Monrovia Thursday. The Tiger Cubs won 4-0 and will face Martinsville for the sectional championship.

"I don't know what to say other than it's nice to win a sectional game," GHS head coach Dave Lilly said. "I liked the draw. We played Monrovia earlier and the goal coming in was we didn't want to let them get on the board against us, so I feel pretty good about 4-0. I think we should have had more."

When the Tiger Cubs took to the pitch Thursday, it was clear they meant business. GHS attacked from the beginning and it looked like they would be put Monrovia behind the Eight-ball early. Five minutes into the game, Greg Lilly found an opening in the Bulldog defense, but his sailed wide. He had another opportunity with 10 minutes left in the half, but again his kick missed its mark.

Lilly's fortune changed in a hurry.

With 6:52 on the clock, Monrovia was cited for a push in the back on Lilly, giving him a penalty kick. Lilly's shot blazed past Monrovia's keeper Bryce Wicks giving the Tiger Cubs a 1-0 lead. He found the net again with 5:14 and rounded out the first half scoring when he poked a shot past Wicks with 0:59 remaining.

Finishing once given the opportunity was clearly on coach Lilly's mind. He noted that his squad got away with it on Thursday, but come Saturday, it will be a different story.

"We've struggled finishing all year, like kicking the ball over the top and we're not going to do those things on Saturday," Lilly said. "It's going to be a different day Saturday. Not to take anything away from Monrovia, but we're going to have to step it up a notch on Saturday against Martinsville."

Greencastle slowed their game down in the second half and focused on ball control. The slower pace resulted in less scoring chances, but the Tiger Cubs added one final score to close the game.

With time waning, Jonathan Good gathered the ball in front of the net and slid it past Wicks with 5:15 remaining to bring the score to its final tally.

In the first game of the night, Martinsville defeated Mooresville 3-0 and will the obstacle standing between Greencastle and a sectional title. An enthusiastic Lilly spoke after the game about what his squad will have to do to down the Artesians.

"We have to finish when we have the chance. We're not going to get as many chances. Statistically if we get five or six goal scoring chances, we're going to have to capitalize on them. That's going to be important. If we capitalize on the chances we get, I'm sure we can play with them. We'll just have to wait and see how the ball bounces. It'd be nice to win a sectional," Lilly said.

Greencastle will go for the Mooresville Sectional championship against Martinsville at 10 a.m. Saturday.

Next game -- Greencastle will go for the Mooresville Sectional championship against Martinsville at 10 a.m. Saturday.