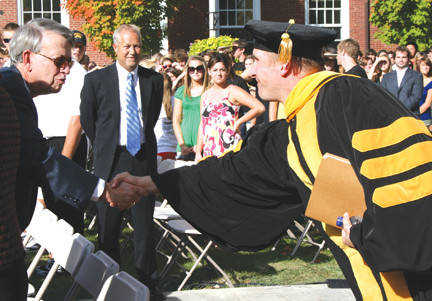 Casey was hired in February after a nine-month international search for a leader.

The new president is an avid reader, listens to jazz and has a strong interest in American History. In fact he has a book being published next year. For fun he swims. Casey was the captain of the swimming team at Notre Dame during his undergraduate years and was named the university's "Scholar-Athlete of the year" in 1985.

Prior to taking the position of President at DePauw, he was associate dean for academic affairs in the Faculty of Arts and Sciences at Harvard.

Casey succeeds Robert G. Bottoms, the longest serving president in DePauw history. Bottoms, who led the university since 1986 stepped down at the end of 2007-2008 academic year to become Chancellor of the University and director of the new Janet Prindle Institute for Ethics