ROACHDALE -- It was a night of great emotion at Cougar Stadium for the North Putnam football team. They clinched at least a share of the conference title, but lost a comrade in the process as they edged Speedway 35-32. 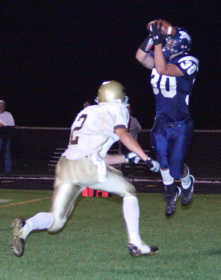 North Putnam's Kyle Adams hauls in a six-yard touchdown pass in Friday's battle with Speedway. The Cougars won 35-32 and clinces at least a share of the conference title.

Again the Cougar faithful were in almost a tournament type fervor throughout the night and kept as much pressure on the Sparkplugs as the team itself.

Early on it looked like North was going to make a run of it. The sideline was hyped; the coaches intense and a Speedway safety barely into the game made it look like it was going to be all Cougars on the night.

Looks can be deceiving.

After accepting the two-point gift from Speedway, North fumbled on their next possession and the Sparkplugs didn't waste any time capitalizing. Jaron Avance charged in from five yards out, giving Speedway the 6-2 lead. He scored again at the 2:01 mark, stretching the lead to 12-2.

Cougar head coach Greg Barrett was happy with his team's win after the game, but was disturbed by their turnovers. He also commended a player who gave the Cougars fits all night.

"It didn't help us to start out with that fumble, I'm not real pleased about that, but we bounced back offensively tonight and I'm pleased with the way we played, he said. "That (Kyle) Linville kid, he's a player now and we almost single handedly took it to us. He's a threat we just might see again."

North Putnam got on the board in the second quarter after a 20-yard spinning run from quarterback Scott Hunt set up a five yard Shawn Diebold touchdown. Diebold took the handoff and broke around the left side, leaping over teammate Griffen Dahlstrom to find the end zone.

The Cougars and Sparkplugs traded possession, then North got the break they needed. Speedway's Jonny West dropped back and fired a pass that Cougar defender Travis Franklin snagged, giving control back to North Putnam.

North began their march down the field with Dahlstrom grinding on the ground, but it was a great catch from Darr Boruff that kept the drive moving. Three plays later Hunt punched the ball in from one yard out, giving North a 16-12 lead.

The intensity of the game permeated from both sideline, with fans going wild. At times, it almost became deafening, but at the 1:25 mark you could hear a pin drop. 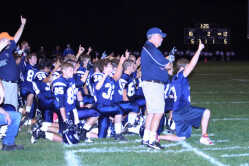 The Cougars on the sidelines raise their index fingers as a salute to injured teammate Shawn Diebold as he's being tended to on the field.

The Sparkplugs were driving down the field and during a 35-yard strike to Michael Hubbard it was clear something bad had happened in the secondary. The Cougars' Diebold lay face down on the field, motionless after colliding with another player. Both sidelines took a knee and the Cougars raised their index finger in tribute to their fallen players. After several minutes, Diebold was stabilized and wheeled to a waiting ambulance, holding his own finger high, acknowledging the cheering crowd.

Near the end of the game, good news came, as the coaching staff informed the players that Diebold was up and walking with no pain.

Speedway added another score before the half and took an 18-16 lead into the half.

North opened the second half with a 13-play drive that covered 61 yards, ending in a Kyle Adams six-yard touchdown reception. The Cougars led 23-18.

The Cougar defense came up big on Speedway's next possession. First Dahlstrom and Josh Keyt teamed up for a backfield tackle, then a diving Rob Ford intercepted a West offering and the Cougars began to march once again.

North kept it on the ground, with Dahlstrom carrying the load. Then came a moment that made the difference in the game. The Cougars faced a fourth-and-four from just inside the five-yard line. Instead of kicking the field goal, Barrett called on his main weapon. Hunt took the ball, scrambled in the pocket and connected with Dahlstrom in the back of the end zone to give North a 29-18 lead.

Dahlstrom added another touchdown at the 7:57 mark, giving North just enough of a cushion to withstand a Sparkplug charge at the end.

Speedway scored with 5:16 remaining, cutting the Cougar lead to 10. Then they recovered on of North Putnam's six fumbles and West found Linville from a 10-yard score, cutting the lead down to three. But the Cougars were too much and ran the clock out.

With the win, North Putnam can do no worse than a share of the West Central Conference title, something Barrett was obviously pleased with after the game.

"It's very excited," Barrett commented. "I haven't been part of a conference championship in about seven years and I'm very excited be part of that. It's a tribute to this group here in the seniors, it's their third one and that tells you what kind of kids we've got. I'm very excited about these guys and they deserve it."

With about a minute left in the game, the Cougar crowd came alive again. First you heard the bump-bump of a drum, followed by "one heart, one beat," the team's motto for the year. As the clock tickled away, the chant become louder and louder and exemplified what the season is all about for the Cougars -- one passion. 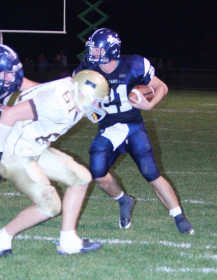 The passion for the Cougars threatened to overtake them at times during the game and Barrett acknowledged the team needs to harness that passion and put it to work for them in a positive way.

"We've got to understand that there's a certain level we get to with our emotions, and you hate to tell kids to back off, but in the long run it's going to kill us -- it almost bit us tonight," he commented. "They've got to understand when to calm down and get to the huddle and relax and pull things together as one heartbeat. Because there's only a few of those beats that are getting off pace and it's our (coaches) job to take care of the referees."

The Cougars will hit the road to battle county and WCC foe Cloverdale at 6 p.m. Friday.

Next game -- The Cougars will hit the road to battle county and WCC foe Cloverdale at 6 p.m. Friday.