Lady Tiger Cubs make it two in a row 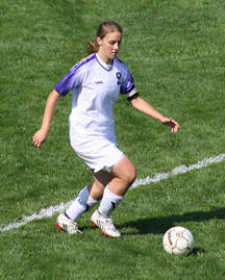 Besides anchoring a defense that allowed only four shots on goal, senior Becky Grivas scored a late goal that sealed Greencastle's 2-0 victory.

The Tiger Cubs defeated the Braves 2-0 on goals from seniors Hannah Spencer and Becky Grivas.

Celebrating with an already talented team he has seen improve throughout the year, Greencastle coach Maurice McKee was beaming after the game.

"I was totally astounded by the way they played today, I guess would be a good way to put it," McKee said. "It's a great feeling for the seniors to be able to score the winning goals."

Spencer, playing on an injured calf and seeing her first significant action of the tournament, put the Lady Tiger Cubs (14-4-1) up 1-0 with 28:06 remaining in the first half.

After a long ball that was behind Spencer's range, Terre Haute South's defender seemed to have the ball controlled in her own penalty area. However, Spencer was just behind her and poked it out from between her feet and into the back of the net. The quick strike seemed to surprise everyone, especially Brave goalkeeper Lauren Hayes.

"Hannah Spencer's just a go-getter and we're tickled to death to have her back on the field today for this game," McKee said. "She brings a lot to the team with her speed and a lot of her commands."

In the early part of the half, the Braves had been on the attack, but the Tiger Cubs maintained the momentum of their goal for the rest of the half. While they had a few scoring opportunities, none found the net, either thwarted by Hayes or by that pesky crossbar, as was the case on a Melissa Ball shot with 4:30 remaining.

The Tiger Cubs led 1-0 at the break, but knew their work wasn't done.

"They were pumped at halftime. They had the 1-0 lead, but they knew it wasn't going to be enough. They were going to have to keep pushing the envelope on them all the way," McKee said.

To open the second half, the Braves (7-10-1) came out with a different look. Normally defensive-minded, they threw everything at the Lady Tiger Cubs as they looked to even the score.

"South came out on us with the six in the front trying to push in for a quick score right at the start of the half. They girls were able to take care of that, which was great," McKee said. "Then they tried to do it again later on the other kicked ball, and our defense held up very well."

Although the move allowed the Braves more scoring opportunities, they couldn't find the net. Greencastle's back line, led by Grivas, held up and kept the pressure off keeper Jennifer Grumme, who had to stop only four shots on the day.

The performance was more impressive by the defenders considering that Grivas, their vocal leader, had no voice on Saturday.

"Grivas was playing without her voice today so she couldn't yell out any commands or anything to anybody. So the other girls in back had to help out and be her voice," McKee said.

With time ticking down, Grivas made another key play, but this one was on offense.

Taking the ball on a restart with 1:30 to play, she lofted the ball over everyone, including Hayes, and into the back of the Brave goal. The Cubs had tried the play multiple times; it was just a matter of getting the right touch on it.

"We knew the long shot would work if we could get it in there. She tried three or four different ones during the day and finally that one went in," McKee said. "Becky's been with me for four years. She's my only four-year senior and it was great to see her get the goal."

While McKee reminded his celebrating team that it wasn't over, the last 90 seconds passed without incident, and the real celebrating could begin.

Up next for GHS is the Mooresville Regional and familiar opponent Center Grove.

"We're just going to have to play for a good solid game," McKee said. "We'd like to beat them because they have never been beaten on the Mooresville Field and I'd like to break that record for them this year."

Greencastle will face Center Grove in the Mooresville Regional at 7 p.m. Wednesday. 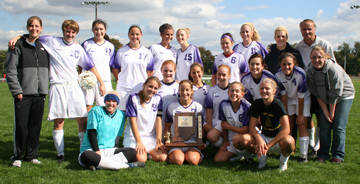 Next match -- Greencastle plays Center Grove in the Mooresville Regional at 7 p.m. Wednesday.